But when he does, he'd like to teach the young point guard a simple lesson: how to slow down.

"He just plays at one gear and it's a very high gear," Kidd said on Thursday shortly after signing his three-year, $9 million deal with the Knicks. "So we'll sit down and talk about trying to find that fourth and third gear so that he has the energy to finish ballgames. We want him to play the whole season. At just one gear, it's hard to play 82 games."

​
Kidd, an 18-year veteran, said he's "excited" to serve as a mentor to the 23-year-old Lin. Kidd was introduced on Thursday at the Knicks' practice facility along with veteran center Marcus Camby.

"I still feel I can start but this is a role they need," Kidd said of backing up Lin. "I'm a basketball player. When I'm out there, I'm a leader. I'll continue to lead. I'm looking forward to the new role."

"To have the chance to mentor a very good player, to be able to share what I've learned the last 18 years, is something I've been looking forward to," he added. 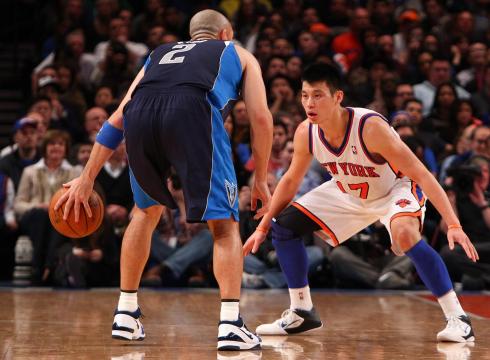 Lin played at a high pace throughout his run with the Knicks last year and it seemed to take a toll. Lin's season was cut short by a knee injury that was first described as "wear and tear" but later turned out to be a torn left meniscus. He played 35 games and missed the final five weeks of the regular season and the Knicks' playoff series against the Miami Heat.

Kidd, 39, said on Thursday he used to play just like Lin.

"It was always fifth gear and go," he said.

He learned later in his career the importance of playing at a slower pace, in part to preserve his health over an 82-game campaign.

He'd like to see Lin learn the same lesson.

Lin is expected to sign a four-year, $28.8 million offer sheet with Houston that the Knicks will match, though GM Glen Grunwald did not want to reveal the team's decision on Thursday because Lin hasn't signed the offer sheet.

Grunwald praised both Kidd and Camby, saying the veteran duo brings "experience" and "wisdom" to the Knicks, who lost in five games to the Heat in the first round of last year's playoffs.

"Marcus is a great leader and is still a great shot blocker, and Jason is still a great point guard," Grunwald said. "... We're trying to put together a team that can compete and I think these two guys are going to be a big part of it." 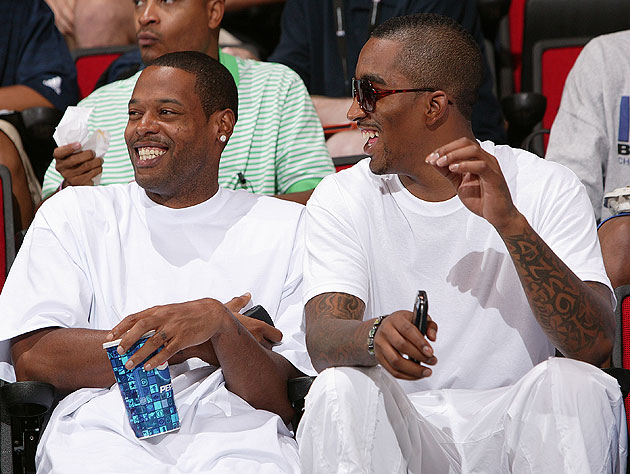 Camby was being courted by the Heat but chose to join the Knicks, returning to New York in a sign-and-trade with the Houston Rockets. During his Knicks tenure, Camby was on teams that battled the Heat in several hard-fought playoff series.

"Being a part of (the Knicks-Heat) rivalry for so long, so long, I obviously consider myself a Knick at heart and I just couldn't see playing in any other uniform," Camby said.

Camby will give the Knicks valuable minutes off the bench to spell Tyson Chandler and Amare Stoudemire.

He's looking forward to "coming back home and trying to finish what I tried to get started here many, many moons ago. I'm just trying to be a part of something special." In addition to signing Kidd and trading for Camby, the Knicks have re-signed J.R. Smith and Steve Novak during a busy offseason.

Grunwald said the Knicks haven't yet decided on whether they will match the offer sheet that shooting guard Landry Fields signed with the Toronto Raptors on Wednesday. The deal is for three years and approaches $20 million. "We haven't reached any decision at this time," the GM said. "We're still looking at that offer sheet and what other alternatives might be available to us."

Good thread as usual, but one thing im optimistic about above all is Kidd being a players development coach after retirement for us. No better PG coach out there. For him to already know Lin's flaws and talk about them shows he is really committed to passing the torch to our future PG. Kidd has the personality and knowledge to become a great player developer.

One thing about great players teaching others the game is that they almost get irritated that the player they're reaching out for isn't learning quick enough or is not as good as them, so its hard for great players to become teachers simply because they demand the same excellence they had from everybody, but Kidd has the right demeanor and attitude that something like that wont happen. I say Kidd will one day be an assistant coach and someone will give him a shot at a HC gig if he wants to take that road in the future.

Both Poll options are important from my view, but i feel i would have to go with the Playmaking PG's- to back or play tandem.

Especially with this Knicks team, a playmaking PG tandem is needed to help get guys the ball is places they are comfortable, present them with better looks at the Basket, control the pace, and open up many other opportunities for our whole team in general.

I never thought I would say this in my life, but Marcus Camby looks fat.

Hope this doesn't translate to injuries and losing his hops.

I think JLin will max the mentoring from Kidd and Prigioni and become a top tier point guard and AllStar within the next two seasons.
K

I remember when he first started out, it was 100% full time all game, showered on a stool after games because he was so exhausted. By the time he got to Phoenix, he toned it down, so to speak, he managed the gas tank much better, where he was there last 5 minutes. There were nights he'd get near triple double numbers in less than 30 minutes, other nights he'd play 40 minutes and don't put up as much numbers. He'll get a gauge of the opponent and manage his tank, where he'll know if he needs some gas at the end. It even got to the point lately, he'd even use timeouts as a strategy to save gas. It's all around the horns and knowing how much time after the initial horn before the inbounder gets the rock and ref whistles it in. Sort of like Kareem in his later years where on offensive free throws, he'd take the time to walk back to the defensive basket to set up versus lining up on the key.

Makes more sense to start Kidd and have Lin play the Ginobili role.

I just hope Kidd's 3pt shot is good this season.

I just hope Kidd's 3pt shot is good this season.
Click to expand...

And by seasons end Lin will likely be the starter, but off the top I would say let Lin come off the bench, that's not going to affect "Linsanity" any and he can watch how Kidd orchestrates the starters for the first 5 minutes of the game and second half (which is critical for us).

As long a Woody tells Lin this is not a demotion, but a time to learn.

Plus I like Lin playing with our second unit more than I like how Kidd fits in with them.


Lin,Smith,Novak,Camby and either Stat or Melo (Stat would make more sense) would be potent


I'm good with whatever


Torn on the poll....transaltion:Great Question~

Kidd should start and let Lin and Kidd close with Melo, with Lin playing 2. Jr. should never come in the 4th.

EDIT: Oh man does Kidd look like a grandpa in that pic.

portega1968 said:
I never thought I would say this in my life, but Marcus Camby looks fat.
Click to expand...

If Camby looks fat, then Felton looks like hippo, and he wants to be a Knick.

deamon said:
If Camby looks fat, then Felton looks like hippo, and he wants to be a Knick.
Click to expand...

GoKnicks! said:
Kidd should start and let Lin and Kidd close with Melo, with Lin playing 2. Jr. should never come in the 4th.

I can see why kidd wants to finish though. The two biggest perks to kidd is

1. Teams cant expect to simply full court press lin to get turnovers. In games where it looks like that is the opposing teams game plan Kidd can simply come in at the 2 for a few minutes and help distribute the ball.

2. Lin is still at his core a score first PG and that is one of the reason the Knicks got Kidd to try to help him improve his team management skills. Kidd knows how to manage games and play defense. If the knicks are up by points (due to Lin getting his alongside Melo, Stat, and JR) why not have Kidd come in and maintain the lead while playing defense to slow the opposing team down.

If Kidd were to start, we might as well bring back Mr. beaver felton in a s&t for Gadz and maybe rights to a draft pick

I'm happy with the current squad, would really like to see Prigioni get some minutes so not crazy about adding another guard.

I like the underdogs, wouldn't mind seeing Copeland either
F

Well He is absolutely right. As much as I loved Lin's attacking, he can't do that all the time for his own bodies sake. He has to learn how to play the game well at a slow and quick pace, and know when the time to attack and when the time to take it easy is, or else he will probably suffer a good amount of injuries.
C

GoKnicks! said:
let Lin and Kidd close with Melo, with Lin playing 2. Jr. should never come in the 4th.

But, I'd have Lin run the point while Kidd plays the 2. Lin's penetrating ability gives the Knicks a better chance of getting a good shot, and Kidd has become a pretty good spot up 3 point shooter and so he could help spread the floor.
P

In response to your poll...the bigger need is play making PG since we have players that need a PG to be effective, especially Amare.

However I believe we addressed both those issues with Kidd and Camby respectively.


To the topic...Kidd is right that Lin would always play in one high paced gear. Lin would sometimes just crash into people and I always knew he would get hurt or be too tired. I admire Lin's hustle and his desire to win but you have to play smart and sometimes he would just run out of gas because of how he played the game.

Kidd sounds already like a good mentor and was a high tempto PG like Lin is. But Kidd learned to play good in the half court and was effective on the championship Mavericks team.

Kidd can teach Lin how to find players in certain spots. When to attack the rim, etc.