Dolan looks like an idiot, reconciling with Oak one day after banning him. 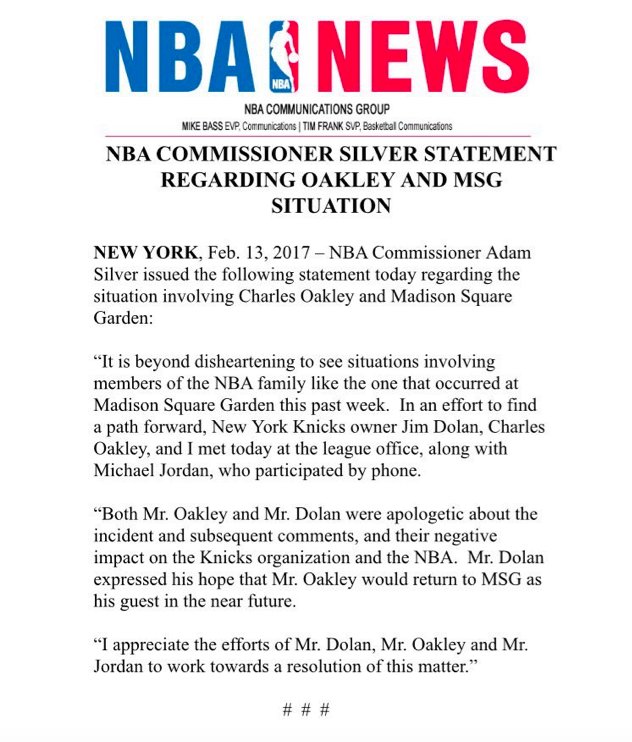 mafra said:
Meanwhile, Civil rights activist Al Sharpton plans to help organize a picket outside Madison Square Garden -- since the policy "has not been reinforced with other players" -- if Oakley's ban isn't lifted.
Click to expand...

picketing outside the garden ... what a fukin lowlife... picket outside the mayors office in Chicago where these kids are dieing every day... oh I 4got dolan is white and the kids getting shot are black so they don't really matter... too bad Sharpton is black... he'd make a great leader.... for the KKK...

paris401 said:
picketing outside the garden ... what a fukin lowlife... picket outside the mayors office in Chicago where these kids are dieing every day... oh I 4got dolan is white and the kids getting shot are black so they don't really matter... too bad Sharpton is black... he'd make a great leader.... for the KKK...
Click to expand...

It's a joke. More black babies are aborted in NY than are born each year but suddenly Dolan is a racist who is hurting people? Sharpton only pickets who he believes will pay him money to stop picketing.

Good article was written that talked about how the liberal agenda fostered racism (and was a big factor in Trump's election) bc it divided the poor into groups (some got advantages and didn't even have to work while others didn't get the same benefits and were working 2 to 3 jobs).

sharpton works for the CIA, as does farrakhan. it's not just a coincidence or good luck that they were some among the civil rights movement who were not assassinated back in the day.
i thought everyone already knew that. didn't they?

paris401 said:
picketing outside the garden ... what a fukin lowlife... picket outside the mayors office in Chicago where these kids are dieing every day... oh I 4got dolan is white and the kids getting shot are black so they don't really matter... too bad Sharpton is black... he'd make a great leader.... for the KKK...
Click to expand...

*see my previous statement about sharpton*
also... listen, man. if picketing outside the garden helps put pressure on dolan to sell the team to someone who is not a total douche, then i say go for it. bring it, rev! bring it!
P

and1... WOW.. the cia .. I would not say no.. who the fuk really knows what is real and not... as to dolan being a douche in respect to owning the knicks... he ceded control to phil 3years ago, which is what everyone was screaming for... so can't put the present mess on him... as to dolan selling... that aint happening...

"No. 1 ? (Oakley) is a legend. Treat him as such," Green said. "Why is (Oakley) buying a ticket to a game, first off? ... It wasn't a problem when (Oakley) was speaking out (when he played in the 1990s). It wasn't a problem when he was protecting (the Knicks') superstars then. So if it wasn't a problem then when he was doing it for y'all, why is it all of a sudden a problem now when he speak out on something that he don't like, and now you want to disown him from your entire organization? ... That's a slave mentality. A slave master mentality. That's ridiculous.
"It was all fine and dandy when he was laying people out, taking fines, and all this stuff for your organization. But now all of a sudden, when he say something that he feels, it's a problem. I disagree with that. I definitely think, like I said, that that's a slave master mentality."

Green also blasted the Knicks for the statement they released after the initial incident, which ended with: "(Oakley) was a great Knick and we hope he gets some help soon.

"How, as an organization, can you come out and say 'we hope he get help?' Get help with what?" Green said. "... That's not something that you say to the world. That's not classy at all, because at the end of the day, if he does have an anger problem and he was OK with the world knowing that, he'd be speaking out about it. He'd be on boards of anger management type things. So it's not OK for you to go say that to the world, as a multi-billion dollar organization."

These players today crack me up.... the star is more of a partner than a slave. It demeans what their ancestors endured to even compare the 2....

DET Tigers and Red Wings owner just died..... turned out he paid Rosa Park's rent for the final decade of her life. The NAACP didn't do that, nor did Al Sharpton..... this white "slave" master had a kind enough heart to help her.... where was everybody else after this poor lady was beaten and robbed and needed help?
P