Where Are They Now? (Former Knicks from the 90's)

With the decade closing for good and to have a little fun and reminiscing, I put this together for ya...

Anthony Mason - Our other soldier at #14 is now 43 years old, with a son who is a senior and plays ball at St. John's University. I'll never forget his immortal free throw technique.

Charlie Ward - At 39 years old, Ward is now the Head Coach for a varsity football team at Westbury Christian School.

Rick Brunson - Remember him? Well the 37 year old has actually been doing more off the court than what he did on the court. "From January to April 2007, Brunson worked as an assistant coach with the Denver Nuggets, focusing on player development. From 2007 to 2009, he was with the University of Virginia as the Cavaliers? director of basketball operations. In May 2009, Brunson was hired as Assistant Coach for the Hartford Hawks men's basketball team." 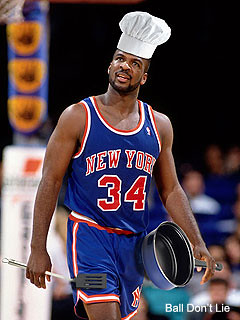 Charles Oakley - At 46 years old, The Oakman has been chefing it up but also rumored to be eager to help the Knicks on the sideline. 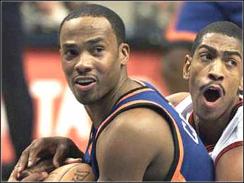 Chris Childs - At 42 years old, Chris Childs will forever be the poster boy for socking it to Kobe. As to what he's been up to... no one really knows. Latrell Sprewell - Foreclosures, Repos and unpaid taxes has doomed one of the most electric players to don a Knicks jersey.

Allan Houston - At 38, he has quit his comeback attempts and is now playing devil's advocate to Donnie Walsh and James "Billion Dollar Budget" Dolan.

Patrick Ewing - At 47 years old, the Big Fella is now the mentor to the next young Big Fella.

Sprewell always had skills, could of made a living playing in Europe.

This thread is awesome. I really wonder what Chris Childs has been doing.

I really hope the Oak man finds his way back into this organization. Players like him are artifacts of the 90s sadly. Players like that can't exist in the current NBA. Not with the way Stern has changed the league. Still, his counsel would be a godsend for this team. I feel these players don't really respect our past Knick teams and are very resistant to embrace the proud history of the franchise. I mean, I'd bet anything Gallo has no idea who Oakley even is and could care less.

YanksKnicks86 said:
Find out what

Davis is college basketball commentator for ESPN. Also, the last I heard of J.R. Reid was when he attempted to get a job as an NBA commentator.

I can see Harper somewhere in Texas reading the paper and throwing down a few cold ones, loving his quiet life.

The Knicks are Back

DaTPRiNCE said:
Ward was the man damn i miss those days where i would tune into games and just watch him do the little things needed for any winning team and then some dude was awesome
Click to expand...

He'd be so much more better than Duhon now.Sign him.

The Knicks are Back

RunningJumper said:
He'd be so much more better than Duhon now.Sign him.
Click to expand...

As of August 2012, he's in his hometown living with his parents. :boohoo:Chris Childs needs to pay his child support instead of running from his responsibilities. If he does not want to pay then he needs to be LOCKED UP!!

Charles Smith, the guy that missed four straight layups on the same play in the 1993 ECF.

In 1989, Smith founded the Charles D. Smith Foundation and Educational Center, in which the building was the first City Hall in the Northeast, and was later converted into a library. The after school center was created for inner-city school children from kindergarten to 9th grades to improve academics and offer a place for youth to get off the streets. Located in Smith's hometown of Bridgeport, it was his dream since playing at Pitt to operate the center that still stands today.
Smith ran a digital media company, based in Manhattan[4] for about 6 years. Smith was also a motivational speaker.[5] He later returned to school to work on his Masters in management, finishing up over at Seton Hall University.[6]
Smith was once a regional representative for the NBA Players Association. In 2008, Smith became the executive director of the NBRPA (National Basketball Retired Players Association). Smith started a transition assistance program to help retired players pursue new careers.[5] Smith left the NBRPA in 2010[7] and later helped establish the Pro Basketball Alumni Association.[4]

I believe he's retired living in Houston. He used to do the occasional basketball commentary for local TV down there.
Last edited: Nov 9, 2012