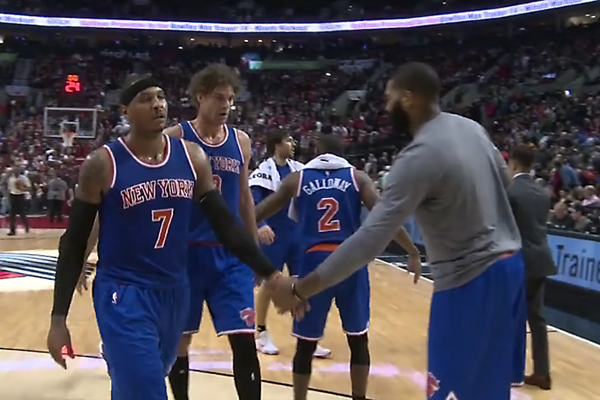 The New York Knicks put an end to their four game losing streak after a thriller win 112-110 over the Trail Blazers last night in Portland.

Carmelo Anthony tied its season high, scoring 37 points while shooting 13-21 from the field.

“I felt good come into the game. I got in rhythm early and maintained throughout the course of the game”

Down by 10 at the end of the third quarter, the Knicks decided to turn things around as they went on a 15-4 run early in the fourth to take the lead  91-90.

The Trail Blazers were close of stealing the win back in the closing seconds of the game. Damian Lillard who got fouled on a three pointer attempt with 2.2 seconds on the clock, made the first two frees to narrow the gap at two, then intentionally missed the third. He managed to secure the rebound but his long three hit the rim as time expired.

The Knicks bench proved to be one of the key factors in last night’s win as they combined for 47 points with three players scoring double figures. Kyle O’Quinn led the bench and scored 14 while grabbing 7 boards, Lance Thomas contributed with 13 buckets and Derrick Williams finished with 10 points.

Arron Afflalo had another solid contribution as he scored 8 of his total 15 points in the final act.

On his return to the city he had spent his last two seasons, Robin Lopez played one of his best games as a Knick, scoring 14 points and rebounding 7 times.

“I think [defensively] we came with a great energy in reaction of the first quarter. My teammates did a good job putting me in good situations, guys found me and i was able to make plays.”

Jose Calderon and Kristaps Porzingis went cold as none of their 10 field goal attends made the target.