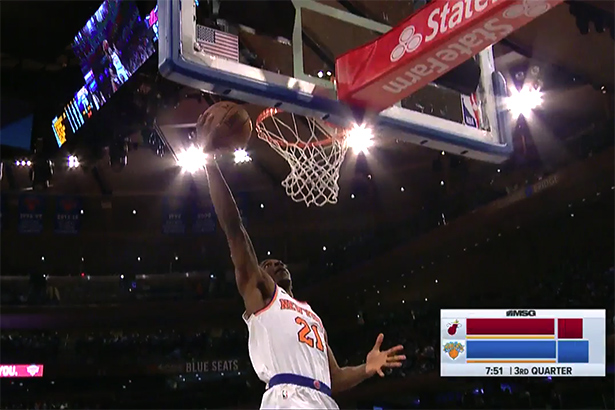 It was one of those nights that started good for the Knicks and ended terrific. Second round pick, rookie Damyean Dotson set a team record, after he posted 30 points and 11 rebounds in Knicks 122-98 win over the Heat at the Garden.

Damyean Dotson is the first Knicks rookie to record at least 30 points and 10 rebounds off the bench since starts were first recorded in 1970-71.

Both rookies made four three pointers as the Knicks made 18 shots from long distance, a season best.

The Knicks dominated their rivals on both ends of the floor and posted better numbers at all chapters. They outrebounded Miami 51-42, dished 33 assists versus just 20 by the other side and shot over 50% from the field compared to Heat’s 39,8%.

However, it was not all pretty. Tim Hardaway Jr. sprained his left ankle and will probably miss the rest of the season. Hardaway, who missed 22 games this season with a stress fracture, was helped off the court straight to the locker room. Fortunately, the X-rays were negative.

Michael Beasley was another blow for the Knicks as he bruised his left knee with just 18 seconds into the game.

The Knicks will host tonight the 42-37 Bucks and end the season with a couple of matchups against the Cavaliers.