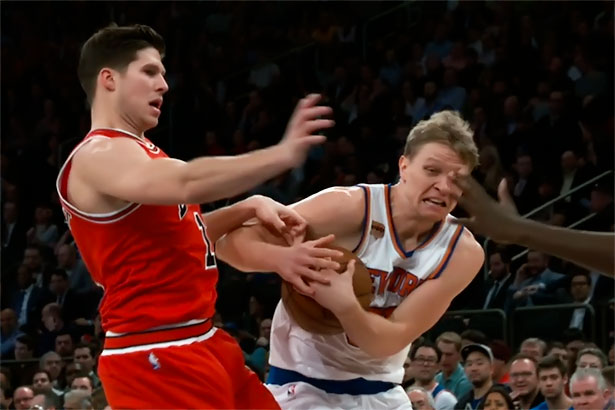 After a horrible loss the other night in Philly at the buzzer, after leading by 10 during the last 3 minutes, the Knicks bounced back and, in a game broadcasted on national tv, they beat the Chicago Bulls 104-89.

Kristaps Porzingis, who missed three consecutive games last week, informed the team that his Achilles tendon was feeling sore and Lance Thomas started for him.

Derrick Rose played his first game at the Garden after missing unexpectedly against the Pelicans. Finned with $200.000 by the organization, he was welcomed with cheers from the crowd during the warm-up and Rose greeted them with 17 points against his former team.

The other former Bull, Joakim Noah, played a tremendous game and finished with 15 rebounds – including 9 offensive – and 12 points.

“Joakim all the time is doing great job in defense and today he helped us a lot in offense. I’m especially happy for him because he played against his ex-team, Chicago, and he was extremely motivated. I hope that motivation he will keep during the season.”

Playing without their star guard Jimmy Butler and Nikola Mirotic, the Bulls were an easy prey for a Knicks team starving for a win. Dwyane Wade scored 22 for his new team while former Knick, Jerian Grant dropped 14.

Once again, Carmelo Anthony scored a game high 23 points to which he added nine rebounds and six assists. Kyle O’Quinn logged another double-double with 12 buckets and 11 boards, but it was the Lithuanian rookie Mindaugas Kuzminskas who impressed. Coming off the bench and awarded with 30 minutes, Kuz shot 8-15 including 2-4 from behind the arc for a  season high 19 points.

The Knicks are now 2-0 against the Bulls and both Rose and Noah seem extremely motivated when they face Chicago.

Rose got a brief moment to chat with Allen Iverson, present courtside at the Garden, whom he called an “icon”. This was the first time the two met and it inspired Rose.

“He was someone I looked up to ever since I was younger. He changed the game on and off the court. And one thing I learned from him is always be yourself.”

The Knicks improved to 18-21 and have a couple of days off before Sunday afternoon’s game against the Raptors in Toronto.