Don't Miss
Home / Recaps / Knicks fail to connect 2 in a row, lose in style to Pacers

Knicks fail to connect 2 in a row, lose in style to Pacers 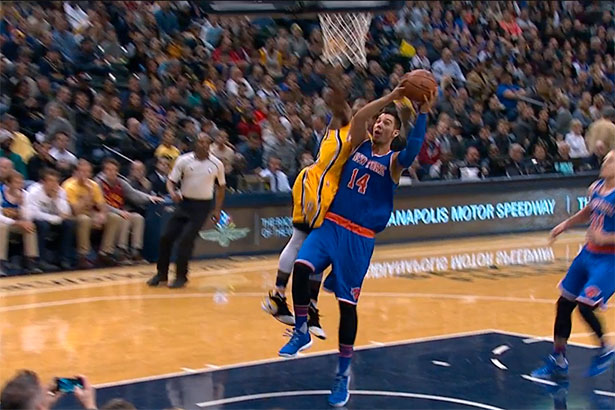 Coach Jeff Hornacek tried to save another disastrous performance as the Knicks’ lack of defense allowed the Pacers to score 62 at the halftime and take a 26 points lead at the end of the third quarter.

With Ron Baker, Brandon Jennings, Mindaugas Kuzminskas, Kristaps Porzingis and Willy Hernangomez on the court, the Knicks won the final act 39-27 but it was too late for a win.

The young lineup managed to cut the lead to 10 in the last two minutes but in the end, they were only able to make the loss seem more easy to cope with and avoid a +30 points blowout.

Carmelo Anthony led the Knicks with 17 points while Jennings scored the same off the bench. Porzingis finished with 16 and Derrick Rose had 14.

Porzingis, who was one of the main offensive weapons but had a game high 5 turnovers, admitted that the lack of defense is an ongoing problem for the Knicks.

“I think the second unit did a pretty good job coming in, shooting the ball well, and our defense wasn’t great again.”

Kuzminskas played 15 minutes off the bench and scored 13 points, shooting 5-8. He grabbed 3 rebounds and delivered 2 assists.