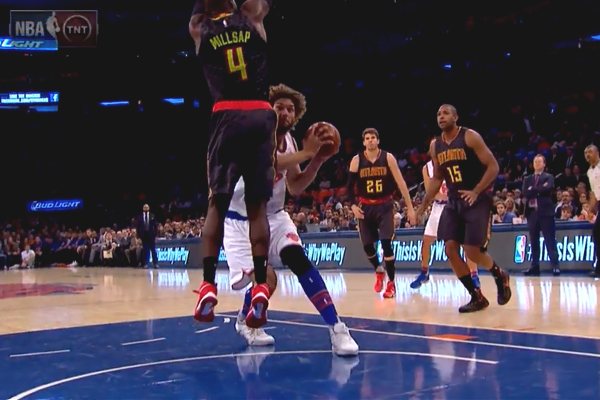 The New York Knicks bounced back in the home opener, losing 101-112 to Atlanta Hawks at the Garden last night.

Playing against the best team in the east last season, Atlanta winning their division for the first time since 1994 and having 4 allstars in the lineup, wouldn’t be as easy as two nights ago. The Knicks went on a slow start, with Kristaps Porzingis struggling with scoring and throwing an air ball early in the game but it was Sasha Vujacic who responded with a three at the next play. New York’s lineup couldn’t stop however Atlanta from ending the first quarter on a 14-2 run.

The second quarter finds the Knicks’ bench on the floor, a unit that is as fun to watch as the next thing. With Kyle O’Quinn, Langston Galloway and Jerian Grant on, Knicks went on a 11-0 run to put the Orange and Blue back on lead. However, as soon as Derek Fisher pulled the younger players back to bench the tempo slowed down, allowing the Hawks to play their game. Atlanta was shooting 52% and ended the first half up 61-45.

Third quarter starts again with Atlanta on the run but the crowd is brought back to life by Porzingis who intercepts a pass from Al Horford to Paul Millsap, makes a spin around him and finishes with a power slam.

Two minutes later he blocks Jeff Teague on a layup but the referees call a foul on him. Coach Fisher reacts to the decision and draws a technical on himself. Down by 22, New York managed to cut the lead to 12 by the end of the third suggesting the game is far from over.

Last quarter wasn’t the expected comeback as Atlanta went up by 19 with less than 5 minutes on the clock throwing the game in the books. New York had a shy attempt to cut the lead but still lost by double digits.

Carmelo Anthony led the Knicks with 25 points shooting 37% from the field. Robin Lopez had a solid presence in the paint finishing the game with 18 points while Kyle O’Quinn registered his first double-double with 10 points and 10 rebounds. So far, him and Langston Galloway are among the most fun players to watch so better keep an open eye on them because they might become key players later in the season. Rookie Kristaps Porzingis had 10 points and 8 rebounds while Derrick Williams scored 9.

Atlanta Hawksrecap
← Previous Story Knicks storm the Bucks in the opener, 122-97
Next Story → Carmelo scores 37 as Knicks win again on the road in Washington thriller