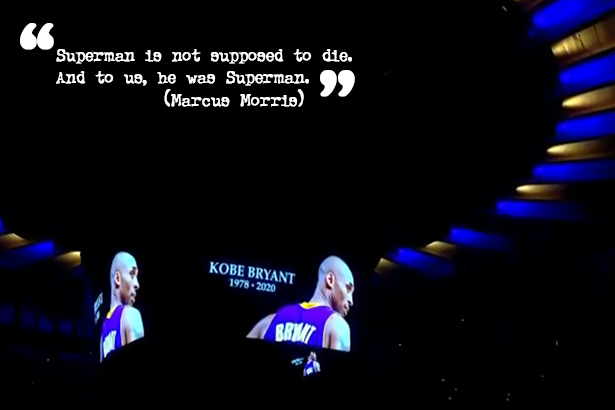 The league and the whole wide world was shocked to hear the tragic news of the horrible helicopter crash that ended the life of one of the greatest men to play the game, Kobe Bryant.

Bryant, 41, and the rest of the crew were heading for a basketball game in Thousand Oaks, where Kobe was supposed to coach his team, Mamba Sports Academy and Gianna was expected to play but just 30 miles northwest of downtown LA, the helicopter crashed taking the lives of all nine.

Just a few hours following the news, the Knicks hosted the Nets. The Garden exterior was lit in purple and gold and the atmosphere inside was eerie. A moment of silence that lasted 24 seconds with the timer shown on the big screen was held and as soon as the timer went off, fans started to chant his name.

The tip was won by the Nets, who advanced the ball and allowed the shot clock to expire as the Garden cheered. The Knicks did the same on their first possession.

Kyrie Irving, who arrived at the Garden left heart broken and missed out the game.

The Knicks won 110-97 but there wasn’t much joy out of it. With 3 minutes remaining in the final quarter, the crowd chanted Mamba’s name again until the final buzzer.