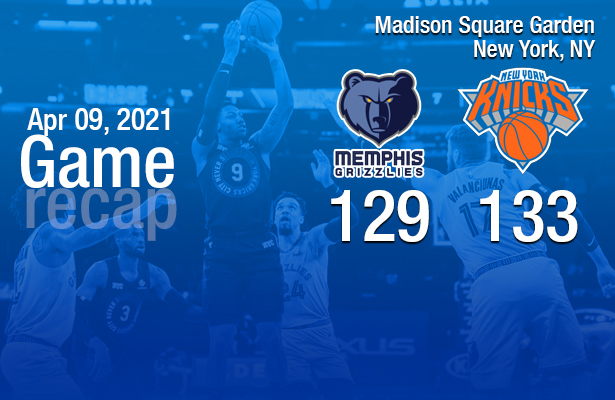 The Knicks had a 15 seconds lead early in the start of the game, then trailed until the very last minute when they managed to tie it and send it in overtime. They controlled the extra time and got away with a 133-129 victory over the Memphis Grizzlies in thriller fashion.

RJ Barret and Immanuel Quickley off the bench, led the Knicks with 20 points each. The second unit also delivered with Derrick Rose and Alec Burks both of them finishing with 19 points a piece and All Star Julius Randle added 15 buckets and 11 boards.

“It always come back around. We’ve been playing our butt off the past couple of games, and we were able to get this one. It just feels good to know we’re doing the right thing and keep working together, and it will pay off. … Hopefully we build off this”

The Grizzlies, who were up the entire game, usually by double digits, were led by Ja Morant who had 26 points. Dillon Brooks dropped 23 and Jonas Valanciunas had 20 and 14.

The Knicks trailed by 13 points with a bit over 6 minutes left in the fourth quarter. Barrett cut the lead to 10 with a 26 foot three point jumper, then Quickley and Randle cut it to 6. Grayson Allen tried to keep is team safe from the free points line and Valanciunas’ dunk with 1:05 on the clock still gave Memphis hopes for the W, as the scoreboard showed 112-106.

The final minute saw Randle going strong and completing a three point play, then Barret who was fouled on a three point attempt made all frees, tying the score at 112. Until the buzzer both teams exchanged a couple of points.

The extra 5 minutes was an intense matchup between Burks and Brooks. Burks scored 9 of the teams 19 points while Brooks scored 10 out of Memphis’ just 15.