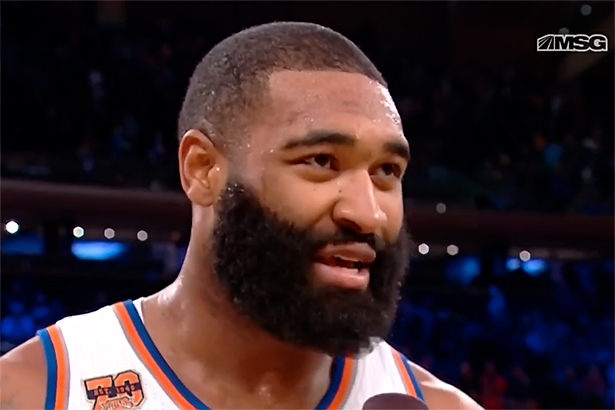 Kyle O’Quinn set the tone early in the game as he had another start, replacing injured Joakim Noah in the lineup. O’Quinn had 10 points, 5 rebounds, 1 assist and 1 block at halftime and by the end of the game he would double those numbers, showing consistency throughout all quarters.

The Queens product not only was a major factor of the Knicks’ 118-114 victory over the Timberwolves but also had a career night; his 20 points came on a 9-11 shooting while he added a team high 13 rebounds (seven offensive) for his first double-double night.

His defense was flawless, keeping ROY, Karl-Anthony Towns to a poor 5-18 shooting, with just 20 points and 8 rebounds, after two nights ago he scored 47 and grabbed 18 boards against New York. Early in the fourth quarter, O’Quinn intercepted a pass from Nemanja Bjelica, threw  a 40 feet pass to Carmelo Anthony for the easy layup and in that moment the entire Garden went wild, cheering for Kyle O’Quinn’s name.

The Knicks led from the first seconds until mid fourth quarter, when the Wolves made a comeback and took a one point lead, due to the turnover flux made by New York’s bench. However, the Wolves could only keep the lead for 20 seconds as one by one, Derrick Rose, Carmelo Anthony and Kyle O’Quinn were sent back in the game to turn the scoreboard in the home team’s favor.

Anthony finished with 29 points while Rose had 24. Kristaps Porzingis had a rough night with just 11 points and a low shooting 2-12 but praised O’Quinn at the end of the game.

“He saved my ass”

New York becomes again a winning team, improving to 10-9 as they sweep the Timberwolves series in style, scoring +100 points two games in a row against a team coached by defense guru, Tom Thibodeau.

Kyle O'QuinnMinnesota Timberwolvesrecap
← Previous Story Carmelo hits the final jumper as the Knicks walk away with the win
Next Story → Knicks top Kings, 106-98 at the Garden, improve to 11-9