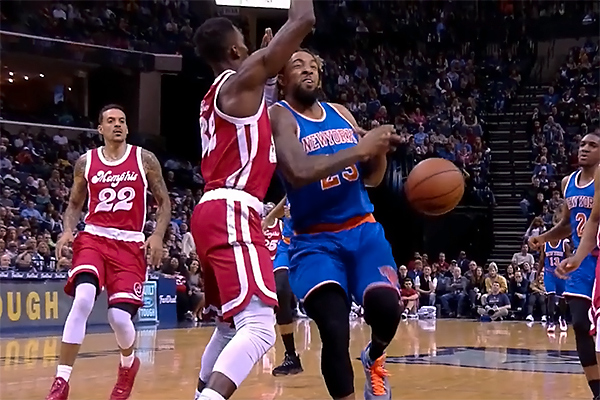 Without Carmelo Anthony who missed another game due to his ankle, New York had a tough time in keeping Marc Gasol from scoring. While the Knicks had three strong quarters, they couldn’t play the last one at the same level and fell 103-95 in Memphis.

Although there was a huge pregame chatter starring Grizzlies’ forward Matt Barnes and Knicks head-coach Derek Fisher, things stood quiet. Probably because of the extra security that has been set at this game – with policemen guarding the Knicks lockers 45 minutes before the tip-off and the corner of the Knicks basket.

Besides, Gasol stole the attention as he scored 37 points shooting 15-29 and grabbed 8 rebounds for Memphis.

Limited by the Grizzlies’ center in controlling the ball in the second half, when the Memphis defense tightened, Kristaps Porzingis finished with 17 points out of which 10 came in the first quarter and only 2 in the fourth. The Latvian rookie was 7-12 from the field.

Langston Galloway started for the first time this season, and contributed with 11 points, 11 rebounds and 5 assists. Arron Afflalo also added 11 points while off the bench, Derrick Williams and Kyle O’Quinn combined for 28 points.

The Knicks,  now 0-4 without Carmelo Anthony and 2 games under .500 will face Philadelphia at the Garden, on Monday at noon.