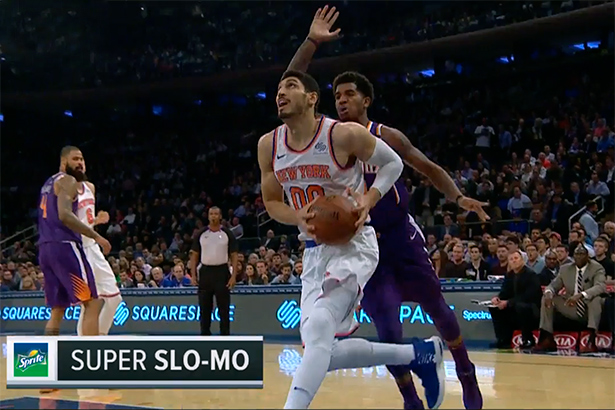 Lance Thomas launched a 26-foot three pointer, assisted by Frank Ntilikina, that put the Knicks up 19-40 early in the second quarter, for their biggest lead of the night. From there on, the win was just a formality.

New York scored 65 points at halftime, then dropped another 55 in the second half as they made Phoenix their fourth victim, with a well-deserved 107-120 win at home.

With all the clouds over Kristaps Porzingis’ head, after his brother/agent made some statements about his future in New York, the Unicorn felt no pressure and for the sixth time in eight games he had a 30+ points game.

After clearing up the air, saying that his brothers’ words were taken out of context and that he sees himself staying in New York for many years, Porzingis scored 37 points – with 20 of them in the first half – grabbed 7 rebounds and blocked 3 shots. Chants of “M.V.P.” could be heard from the crowd starting with the second quarter and although he made only one three pointer, he rewarded the Garden with several electric dunks.

“I’m getting better as a player. I can read more things, the game slows down for me and I’m learning to draw more fouls. It’s important to get to the line. I’m growing as a player.”

Enes Kanter, the other tower of the team, checked another double-double, exploding with 16 points and 15 rebounds while Tim Hardaway Jr. scored 21.

The Suns rallied in the third quarter and attempted a comeback as they cut the lead to just 5 points when Michael Beasley stepped up. Beasley scored 9 of his total 11 points in a span of less than two minutes, while shooting 5-7 in one of his best games since he signed with the Knicks; Doug McDermott added 12, including a couple of highlight dunks.

From the other side, Devin Booker led the Suns with 34 points and former Knick, Tyson Chandler, had 15 buckets (including a dunk as the final buzzer was heard, sticking it to his old team, after Jarrett Jack hold on the ball and gave Phoenix the final possession) and 10 boards. He, however, praised Porzingis, calling him special.

The Knicks improved to 4-4 after last night and will continue their home saga on Sunday night when they will host the Indina Pacers.