Without KP and THJ, Knicks suffer horrible loss in Indy, 97-115 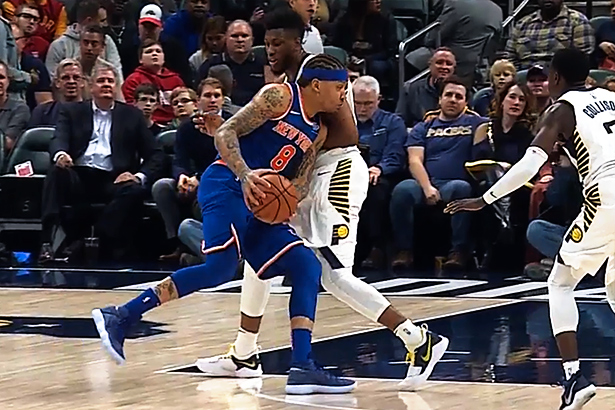 With Kristaps Porzingis and Tim Hardaway Jr. continue to miss games, the Knicks are having a hard time in staying above .500.

Last night, against the Pacers, they trailed by as many as 38 early in the third quarter before finally admitting the defeat, 97-115.

The Pacers had seven players that scored in double figures while the Knicks had only three, two of which came off the bench.

Michael Beasley got to start again for KP and scored 13 points while shooting 60% from the field but also committed 5 turnovers. All the other starters finished with less then 10 points.

The good news was that Willy Hernangomez received again important minutes (16) and finished with a team high 14 points while also grabbing 10 rebounds to be the only Knick in double double. However, most of the minutes were in the fourth quarter, when Jeff Hornacek had already given up on the game.

With a horrible defense, the Knicks allowed the Pacers to shoot 53.5% from the field including over 40% from behind the arc. In fact, 33 of Indiana’s points came from long distance compared to New York’s 18.

“They had more energy, they were quicker to everything. The battle just wasn’t there for us tonight. It’s defensively, you’re missing two of your top scorers, you’ve got to do it with defense. You can’t afford to give up 64 percent in the first half.”

The Knicks continue to struggle on the road and are now 1-7 when they don’t play at Madison Square Garden. They also dropped under .500 for the first time since they were 3-4.