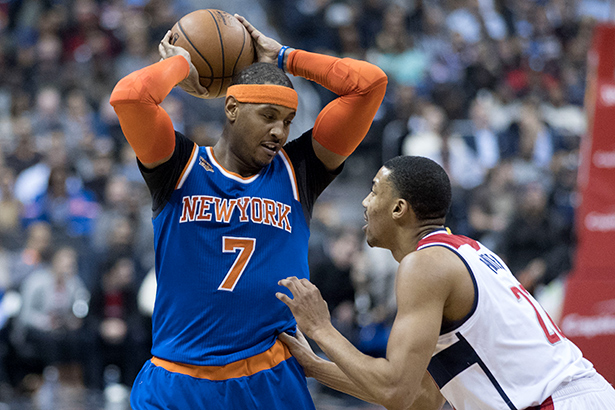 Anthony is still on the roster and trade talks between the Knicks and interested teams have stalled, so Anthony could likely join the Knicks in training camp next month and stay on the roster when the season starts.

That said, is hard to ignore that Anthony is no longer in the picture for the Knicks’ future, at least on paper. There are no shots of him on the home page of the Knicks website. You can find Kristaps Porzingis update videos, a Tim Hardaway Jr. picture promoting ticket sales and an update on Frank Ntilikina, but no sign of Anthony.

Here’s part of Mills’ post talking about his vision for the Knicks (Anthony is not mentioned once):

“Dogged defense. Crisp, unselfish ball movement. Scraping for loose balls. These will be our hallmarks.

And our plan to become more youthful and athletic is underway with 22-year-old Kristaps Porzingis, the return of Tim Hardaway Jr., 25, Willy Hernangómez, 23, and with the debut of our 1st round draft pick, Frank Ntilikina, just 19.”

The post continues to explain the team’s philosophy moving forward, the importance of developing a desire to work hard among all players (opposing what many believe to be laziness on the different Knicks teams over the last two decades), but again, Carmelo Anthony is never mentioned.

It’s no secret that the Knicks have wanted to trade Anthony and get Porzingis out of his shadow, but since Phil Jackson gave Anthony a no-trade clause, Carmelo has the power here.

The Knicks and the Rockets have been closely linked to a deal involving Carmelo Anthony for quite some time. Anthony’s no-trade clause allows him to control his destination and the only team he wants to play for is the Rockets, but New York and Houston have struggled to involve additional teams that can help make the trade work.

The problem is that a direct trade between the Knicks and the Rockets won’t work because Houston doesn’t have enough assets to convince New York to make a deal. The Knicks would likely ask for Ryan Anderson, but he will make $19.5 million next season, so the Rockets would likely have to propose a trade centered on reigning Sixth Man of the Year Eric Gordon, but getting rid of Anderson or Gordon would hurt their depth.

The Trail Blazers were said to be very interested on adding Anthony, as he would make them a better team and help them fight in the competitive Western Conference. Damian Lillard and CJ McCollum have even recruited Anthony to Portland publicly and privately all offseason but it’s not known if he would consider joining them.

The situation is complicated. Anthony is not happy with the Knicks and they want to rebuild without him but they’re not willing to take less than what they want. The Knicks have moved on from Anthony, at least as far as their mindset, but the actual moving on has been hard.

For now, the Knicks are stuck with a player that they don’t seem to want around. Anthony’s desire to play for them has decreased over the last few seasons, especially after former Knicks president Phil Jackson got involved in a very public feud with him.

NBA odds will be offered by Bovada, so review them first and wait to see how Anthony’s situation unfolds before placing an NBA Futures bet on the Knicks.

The relationship between Anthony and the Knicks feels beyond repair at this point. Anthony insists on playing with the Rockets so both sides have to make it work somehow because there’s no deal in sight and it seems they will be together once again at training camp.

Carmelo Anthony
← Previous Story Will Carmelo Anthony still be a Knick on opening night?
Next Story → How Good/Bad was this Offseason?