Will Carmelo Anthony still be a Knick on opening night? 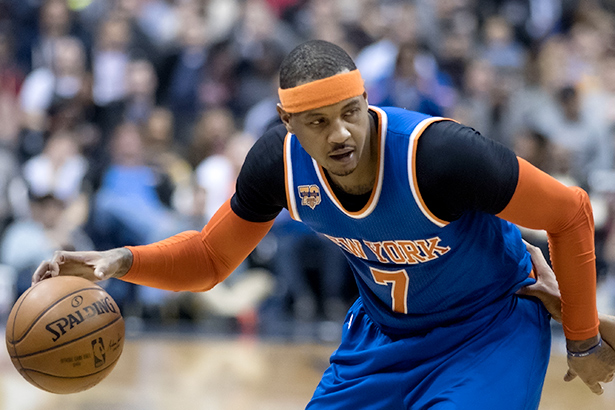 It’s October 19th, almost 8 pm EST, in Oklahoma City as the Thunder get ready to take on the New York Knicks. The stadium is buzzing as the starting lineup takes the floor. Kristaps Porzingis, Tim Hardaway Jr, Willy Hernangomez walk on. However, is Carmelo Anthony walking onto the court of Chesapeake Energy Arena floor in a Knicks jersey approximately 60 days from now? Let’s take a look and see if he most likely will or will not be a Knick when the season starts.

Over the past few months and especially the past three weeks, the NBA has been swarming with rumors surrounding Carmelo Anthony. What makes the Melo rumors so interesting and unique, is that Carmelo Anthony has a No-Trade Clause in his contract. So basically, the Knicks are only allowed to trade Anthony to a select group of teams that he chooses. To make the situation even more complicated, Carmelo Anthony only has been willing to put the Houston Rockets on his NTC list.

This, the fact that he only is willing to be traded to one team, is the primary reason why Carmelo Anthony will remain a New York Knick when the season ends. He did have the Los Angeles Clippers and Cleveland Cavaliers on this short list, but Chris Paul leaving LA and not playing with Kyrie Irving in Cleveland eliminated those two teams.

So, we are left with the Houston Rockets. First of all, I do not believe that Melo will change his stubborn position on only considering Houston. He has been recruited heavily by Damian Lillard and CJ McCollum but refuses to waive his No-Trade Clause for the Portland Trailblazers. He is also unwilling to waive his NTC to play for a contender along side his best friend Lebron James, even if it is without Kyrie. And so, it is safe to say that the extremely limited landing spots (only Houston) for Carmelo Anthony shrinks the odds that he will be off the team by the start of the season.

Touching on a factor briefly that also makes a trade difficult, let’s talk about Anthony’s contract. It’s going to be VERY hard to unload Anthony’s $27.2 million dollar deal onto another team without having them violate the NBA’s financial rules.

For a Rockets deal, they would have to give the Knicks a bad contract or two (Ryan Anderson – $20M) just to make it work financially. This too shrinks the probability of a trade even more because the Rockets are already handling huge contracts of Chris Paul and James Harden.

The Knicks are looking for sub-26-year-old players and other than Capela, I do not see any young assets on the Rockets’ roster. The Rockets gave up solid assets in Patrick Beverly, Sam Dekker, and Lou Williams in exchange for Chris Paul and now lack players to piece together a deal to haul in Anthony. Even if a third team was brought into this trade to satisfy the Knicks’ young desires, the salary issue of Melo and the fact that no one would want Ryan Anderson’s $20 million deal makes a deal nearly impossible.

Something could happen to change the current state of these two teams. However currently, Carmelo Anthony is unwilling to waive his no trade clause for any team besides the Houston Rockets, his salary makes it hard for a deal to be made, and the Rockets lack enough assets to give the Knicks. With all of this being taken into consideration, I think Carmelo Anthony will walk onto the court draped in a New York Knicks jersey 60 days from now on opening day. What do you think?

Carmelo AnthonyHouston Rockets
← Previous Story Is Carmelo the best thing to happen to the Knicks lately – and why are they ready to let him go?
Next Story → Carmelo Anthony’s future in New York still up in the air