Clutch Carmelo is key to the Knicks’ success 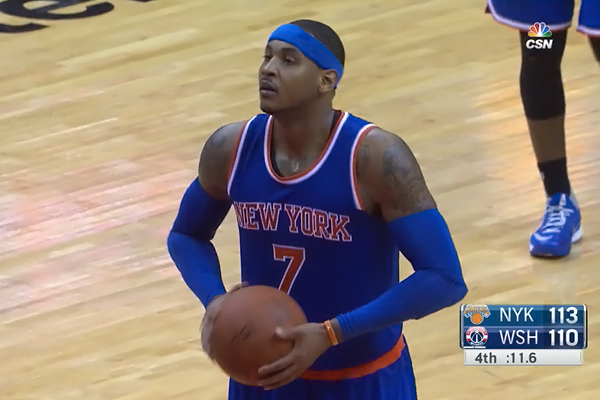 The Knicks usually find themselves facing dark days as a franchise. Over the past ten years, there hasn’t been any cheers to replace the jeers or playmaking capabilities associated with the decades prior. This seemed to be the case once again this season when the upstart team begun the season at a 3-6 mark.

A complete turn-around has allowed for the team to win 9 out of their last 13 contests, and 8 of their last 10 home games. This has placed them near the top of the Eastern Conference and has created a buzz of relevance surrounding the team.

These resounding themes are thanks in large part to the play of the team’s veteran leader: Carmelo Anthony. Anthony has played in the Knicks system for 5 years and has led the team in also major statistical categories during his years there. His success on the court has been due in large part to the team finally going out and retrieving the type of players needed to build a championship roster.

Bringing in Derrick Rose and Joakim Noah during the offseason made up for the few losses the team did have. Rose brings a savvy game, while Noah holds his own on the defensive end and on the boards. The two fit the system Phil Jackson has searched for and it affords Carmelo Anthony the opportunity to continuously get up shots.

This has been the key for the Knicks victories: Allowing Carmelo to be a “ball hog”. The team has worked to limit the time he has spent holding the ball, while being able to increase the amount of shooting opportunities he gets each night.

To the surprise of many, it’s working. Anthony is averaging just north of 23 points per contest and carrying a modest shooting percentage of 43.6%. His opportunities were showcased in full when he hit many big shots to propel the team past the Heat in a 114-103 victory.

Anthony scored 35 points in the contest and stepped up down the stretch of that game. Surrounding a star player with unique talent continues to be a recipe for success.

His style of play rivals no one in the NBA and his ability to excel in ball-handling, rebounding and passing skills truly adds to the intrigue behind this budding star. His size doesn’t fit his game, which puts him leaps and bounds ahead of other players at his position. He can put the ball on the floor and can spot up to get his shot.

Combining these players has created a positive outlook for the team. They understand each other and there isn’t a player that needs the ball to remain happy or relevant, for that matter. They fit together nicely on the court and the longevity of Porzingis has allowed for him to be an anchor for the second unit at times.

The season is still young, but the Knicks really seem to have things figured out. It will be interesting to see if this stability remains in place over the course of a season-long campaign.

Carmelo AnthonyDerrick RoseJoakim NoahKristaps Porzingis
← Previous Story Where The Knicks Stand After the First Benchmark of the 2016-2017 Season
Next Story → Who Should the Knicks Target Before the Trade Deadline?