Don't Miss
Home / Columns / Who Should the Knicks Target Before the Trade Deadline?

Who Should the Knicks Target Before the Trade Deadline? 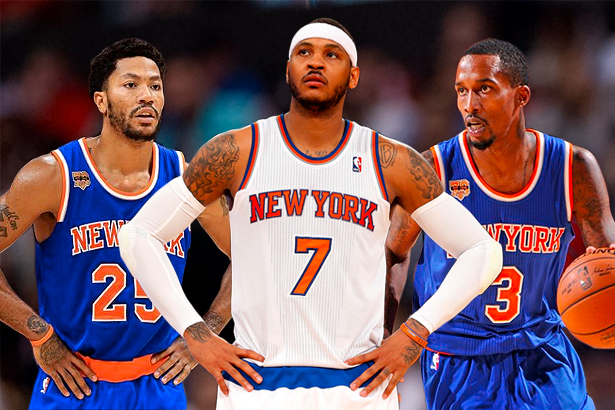 The NBA trade deadline is fast approaching and while some teams have already established themselves as buyers or sellers, the New York Knicks have yet to enter the fray, despite plenty of needs and plenty of rumors surrounding the team in terms of what they might do.

Even though the Knicks are currently sitting below .500, they are still within striking distance of a playoff spot in the Eastern Conference, so there certainly is a reason for them to be buyers.

Conversely, the team that Phil Jackson has put together isn’t exactly a juggernaut and it may be time to cut bait and start over, saving only a few pieces to build around.

Whether or not the Knicks will try to fortify the roster or conduct a fire sale is going to depend a lot on what they decide to do with Carmelo Anthony. Not long ago, Jackson was wooing Anthony and selling him on all the reasons to stay in New York. Now, Jackson is openly critical of Melo one minute, while saying his words were misunderstood the next.

Even though there were rumors that the Knicks and Los Angeles Clippers were talking about an Anthony trade, if they could find a third team to join the mix, there could be a move.

There have been rumors about Anthony joining King James in Cleveland, except for the fact that the Cavs don’t want to part with Kevin Love in any trade scenario. Love is having his best season as a Cavalier and was rewarded with an All-Star spot, but will miss the game with a knee injury that will at least keep him out six weeks. In an ironic way, Carmelo Anthony is replacing Love on the roster.

There are too many reasons moving Anthony just won’t happen, mainly because the Knicks’ high asking price combined with a somewhat bare market for his services. This is makes it more likely that the Knicks will be buyers if they decide to make some trade deadline news.

That being the case, the Knicks need to decide what assets they are willing to part with in order to acquire talent that can give them a boost this season and put them into playoff contention next year.

One possible piece is point guard Derrick Rose. Rose has shown flashes of his former self, including a few 30-point games and a run of several consecutive 20-point games, which could increase his trade value. However, his contract expires at the end of the season and he could be seeking a max deal, which many teams might be wary of offering to the oft-injured, former All-Star.

New York could also try to move reserve point guard Brandon Jennings, who has increased his trade value with his recent play, but clearly one of the two would have to be off-limits, so there is a decision to be made there.

Regardless of who they are willing to part with, the Knicks have several needs. Their team defense and defensive rebounding is some of the worst in the league. Memphis’ Zach Randolph could be an option here, but the Grizzlies will probably want to keep him around because he is a locker room leader, so New York could look at the Bulls’ Bobby Portis. There are also several other potential options to sure up the defense.

On offense, the team is in desperate need of another scorer to go with Anthony, in particular, guards who can routinely sink open jumpers. Perhaps a Ricky Rubio, who can also play some defense, or a Goran Dragic, depending on the Miami Heat’s asking price.

Additionally, since the triangle offense needs a solid post presence to help it go, Greg Monroe or Jahlil Okafor could be targets. The Sixers need backcourt help and the Knicks have Rose or Jennings to offer in a deal for Okafor.

The bottom line is that the Knicks really only have Anthony, Rose and Jennings to move and with Anthony pretty much not going anywhere, New York figures to stay in a win-now mode, meaning they must be active at the deadline.