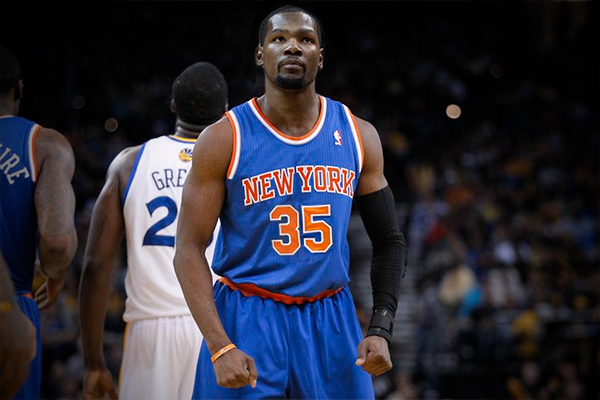 Kevin Durant, the biggest name of the 2016 free agency has been setting up meetings in New York with various NBA teams. The first franchises on the list of the Thunder superstar were Golden State, Boston, LA Clippers, Miami, San Antonio and of course Oklahoma City.

While the New York Knicks were not among the initial teams set to make a pitch at Durant, and were considered a long-shot, the idea of landing KD to the Garden seemed to have taken a blow.

However, latest reports are that New York managed to secure a meeting.

#Breaking: Kevin Durant has informed the #Knicks organization he will meet with them, per sources.

Duran’t decision will eventually be basketball related and even though him and Derrick Rose are friends, the fact that while in Chicago he (Rose) couldn’t/wouldn’t lure any big name to join, keep the Knicks as underdogs in this race.

On the other hand, if KD would chose New York, he would get to play also alongside Carmelo Anthony – another friend, and Kristaps Porzingis whom Durant called a “unicorn”. With a ring master as team president in Phil Jackson, Durant has plenty of reasons to keep the Knicks as a viable option.