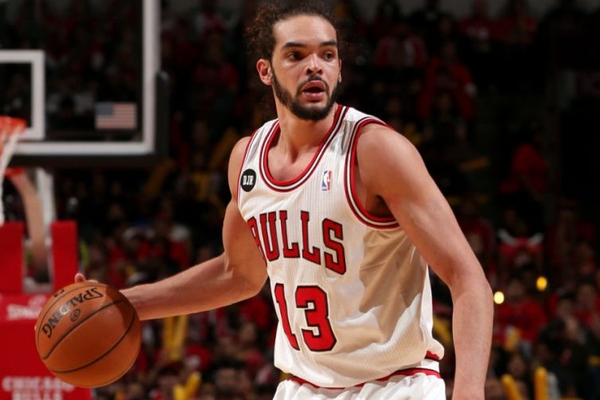 Update: July 2, 2016 – ESPN reports Joakim Noah and the New York Knicks agreed to a four year $72 million deal after a Friday night 3 hour meeting that took place in an Orlando-area hotel between Noah and the Knicks front-office: Phil Jackson, Jeff Hornacek, Steve Mills and others.

July 1, 2016 – With Oklahoma City eyeing Al Horford, the plans for New York to land Kevin Durant this summer seem to have faded.

Still, a meet between the Knicks and New York native Joakim Noah will take place later today and it is expected for the two parts to agree.

Former Bull, Noah is a close friend to the latest Knick aquisition, Derrick Rose and has been praised by him on many occasions since the trade.

Coming off a shoulder injury that limited to just 29 games last season, Joakim Noah, 31, has played 8 seasons alongside Derrick Rose in Chicago and was named the Defensive Player of the Year in 2014. Two times All-Star, Noah seems like a perfect piece to fill the void left by Robin Lopez at the center position.

Sources of the New York Post reported a possible 4 year deal worth $70 million which would still leave the Knicks with a cap of $17.5 million to sign a starting shooting guard and a backup point guard.