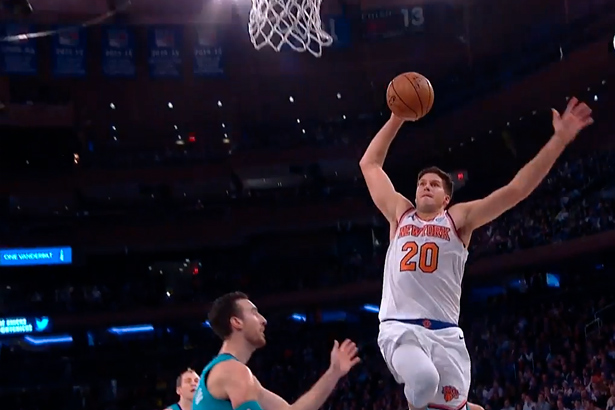 The magic continues at Madison Square Garden. Being named Eastern Conference Player of the week the other day, Kristaps Porzingis continued his powerful start of the season and last night he delivered 28 points against the Charlotte Hornets, including a tiebreaking three pointer with 1:48 remaining on the clock, after the Knicks trailed for more than three quarters.

Porzingis sat for the most of the second half before he returned on the floor late in the fourth quarter to help the Knicks mark their sixth win.

“I wanted to get back in. It felt like I was able to help there, but guys that were in at that moment were doing a great job coming back into the game, playing hard defense, giving energy to everybody in the crowd, I was ready to come in.”

As KP acknowledged, the whole team stepped up. And the bench was no exception. Doug McDermott dropped a season high 20 points while shooting 7-8 from the field, including 3-3 from behind the arc. He was also perfect from the free points line and half of his buckets came in the last act.

“Doug’s a beast. He was doing this in practice. We know what he’s capable of doing, and he’s doing it.”

Just two nights ago, the Knicks rallied from a 19 points deficit to beat the Pacers. This game was not much different as at one point, the Charlotte Hornets were up by 15, just before halftime. But New York dropped 7 three pointers in the second half and managed to tie the game. With 11 seconds left to play, Porzingis made a clutch drive to the basket and put the Knicks up 113-116; the Hornets couldn’t answer back. Final score, Hornets 113, Knicks 118.