Without Kristaps Porzingis, the Knicks bow to Magic, 99-112 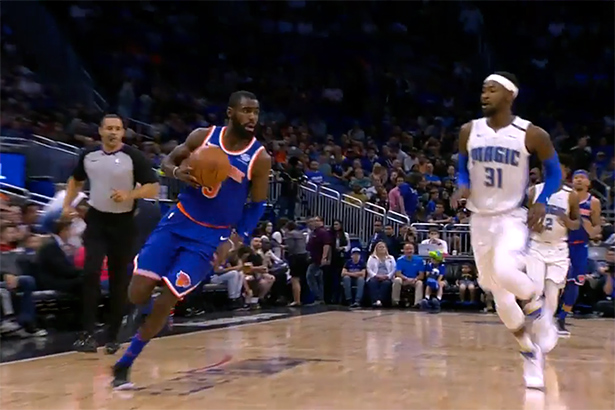 Kristaps Porzingis missed his first game of the season, due to ankle and elbow injuries, and the Knicks became a different team. After hitting 300 points in the first 10 games of the season, setting a new franchise record, KP sat on the bench throughout the whole game,wearing a blue suit.

The ingredients from the previous two games were there. Knicks trailed by a dozen early in the fourth quarter only this time the comeback didn’t happen.

In fact, New York stood pretty well in the game for three and a half quarters and were just two points behind Orlando when the Magic went on a 11-3 run. But the Knicks had no reply and never came close until the final buzzer.

Coach Jeff Hornacek blamed it on the schedule.

“They had a little more energy. Obviously, us coming off last night’s game, getting here at 3 a.m., whatever it was.. Orlando has been here for two days waiting for this game.“

Michael Beasley, who got to start, ended with just 4 points in 20 minutes on the floor.

Coach Jeff Hornacek played the entire bench except for one player. The first points guard, Ramon Sessions was not allowed to play, getting his 8th straight DNP. With Mindaugas Kuzminskas getting two minutes of action, his first of the season, it seems that Sessions will be the one that’s going to be dropped once Joakim Noah’s suspension is lifted, on Monday.

After scoring a season high 20 the other night, Doug McDermott had another good game and dropped 13 off the bench, including 3-4 from long distance. McDermott was the only bench player who finished in double digits.

Willy Hernangomez was played 8 minutes and he scored a point for each minute. Kyle O’Quinn scored the same and Frank Ntilikina dropped 6 and dished 9 assists.

For Orlando, Nikola Vucevic, Aaron Gordon and Evan Fournier combined 68 points while Elfrid Payton was the sole Magic in double-double, with 11 points and 11 assists.

Knicks (6-5) will return to Madison Square Garden on Saturday night, where they’ll face the Sacramento Kings (2-8).