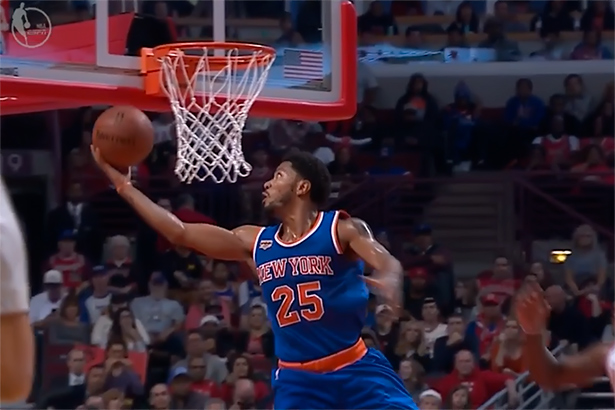 Derrick Rose got more boos than cheers during his return to Windy City but that didn’t get him. In fact most of them were heard during the introduction and on his first possessions because once New York built, they stopped. Rose had one of his best games since the trade, finishing in double-double, with 15 points, 11 assists and 7 rebounds, helping the Knicks win their second game of the season, 117-104 over his former team.

Alongside Joakim Noah, the former Bull duo dominated the floor, doing exactly what everybody’s been expecting from them. Noah was just one rebound away from his first double-double and finished with 16 buckets, 9 boards and 4 dimes.

The Knicks built an early 16 point lead in the first quarter but blew it later in the second, with Dwyane Wade on fire from behind the three point line. Never being a long-distance shooter, Wade rarely shot the three. Last night he was 5-7 from downtown and torched the Knicks with a game high 35 points to which he added 10 boards.

But Kristaps Porzingis was an offensive beast, playing at All Star level. The Latvian sophomore scored 27, including 4 threes, while shooting 10-15 from the field, after playing one of his worst games of his NBA career two nights ago, against the Rockets.

Carmelo Anthony emerged when his team needed him the most. Entering the locker rooms trailing by one point, Melo exploded in the 3rd act scoring 9 of his total 25 points, to help the Knicks take back the lead and consolidate the win.

Going for a shorter rotation, coach Jeff Hornacek gave most of the minutes to the starters and this time, the entire lineup scored double figures. Courtney Lee played over 40 minutes and had 17 points while shooting 8-10 from the field. Overall, the starting lineup banked 100 points! It was one of those games when the team shot 52% from the field and 43% from long distance.

Lance Thomas, who is having a slower season, missed the game due to a sprained ankle.

The Knicks improved 2-3 after last night’s win and will host the Jazz on Sunday at noon, at the Garden.