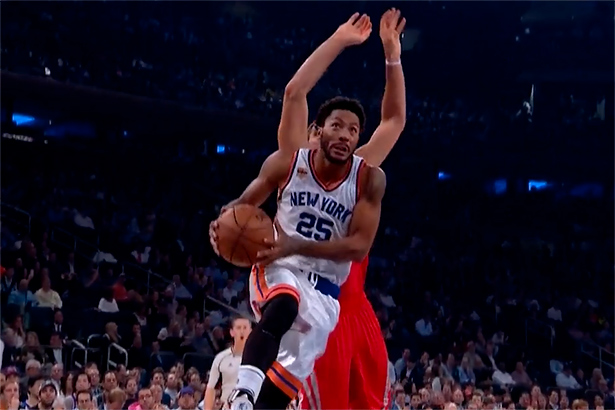 Coming off a loss over the Pistons, the Knicks returned to the Garden with hopes of getting back to .500. But the poor defense displayed at the Palace of Auburn Hills got even worse at home, in front of a high paced Mike D’Antoni style Houston Rockets.

New York allowed the Rockets to score 68 points (just like in the preseason game) and build a 17 point lead at halftime, to propel them to a 118-99 victory.

James Harden, running the point for Houston, combined with Eric Gordon for 51 points. Harden himself was unstoppable and scored 31, dished 15 assists and rebounded 6 times.

“It’s almost like we let James do whatever he wanted”

Coach Hornacek is already on the hot seat after two bad losses and while Rose keeps on playing the lack of defense card, it seems like Phil Jackson is also pushing for the triangle offense.

“It’s nothing but defense. If we don’t come out and play defense, we’re going to keep getting smacked like this.”

Hornacek tried different scenarios last night, with Maurice Ndour at the center or with Ron Baker guarding Harden, and had equal effect as keeping two starters, in Kristaps Porzingis and Joakim Noah, benched at the same time.

Carmelo Anthony scored 21 points, added 7 rebounds and still believes that the Knicks will eventually get back on track.

The upcoming schedule doesn’t look much promising as the Knicks will play the Bulls on Friday night, in Chicago and on Sunday, at noon, will host the Jazz.