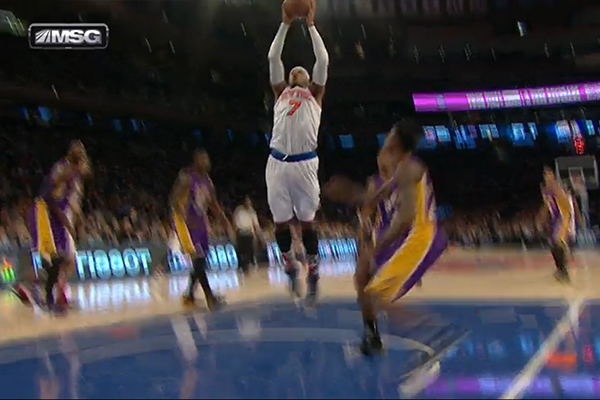 Derek Fisher made no changes in the lineup and started with the same backcourt of Jose Calderon and Sasha Vujacic. And the first 2 points of the game were made by the Spanish point guard. Carmelo Anthony draws a three and after two free throws made by Kristaps Porzingis, Vujacic shoots from distance to give New York a 10-2 start.

The Lakers would fight back and tie the score 25-25 to end the first quarter. Langston Galloway who played for most of the second quarter had 8 points by halftime and 2 rebounds, shooting 75% from the field. Lakers would outscore the Knicks however, Kobe Bryant wanting to get another win in New York after winning in Brooklyn the other night. He had 10 points at halftime.

Derek Fisher gets two technicals for arguing with the referees over a foul Porzingis committed on Kobe and gets ejected. Bryant would make 3 out of the 5 free throws awarded with. The Knicks would end the third quarter with the bench on the court and leading 70-71, after LA led by as many as 8 early in the second half.

Final act is the most intense with LA leading for most of the part but it is Langston Galloway who nails a three pointer with less than 2 minutes on the clock to put the Knicks up by 2 for the first time in the fourth quarter. Porzingis also makes a couple of free throws, then grabs a rebound to get in double-double.

Final score Knicks 99, Lakers 95 and New York cuts the losing streak, win the first game at home this season and spoils what might have been Kobe Bryant’s last game at the Madison Square Garden. Also, for the first time the starting back court outscored the bench, 19-16.