Knicks fall to Bucks, lose 3rd in a row 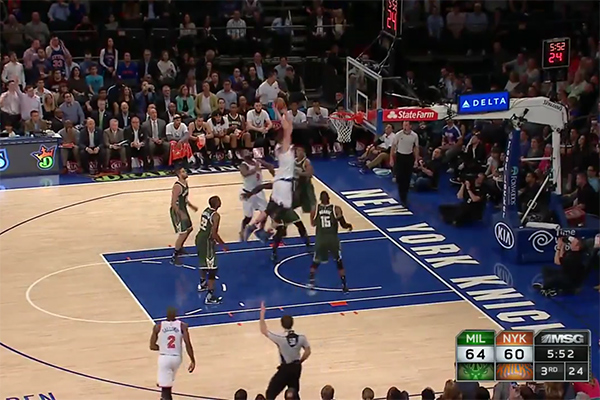 The New York Knicks lost third game in a row and failed to bring the home crowd the first win at MSG as they fell to Milwaukee 99-92.

The starting backcourt had another disastrous night as they proved to be one of the most inefficient combo in the league. This time, they combined 43 minutes and 2 points. A close look at the season start we can see that the bench has outscored the starters on each and every single game. In the opening night, Jose Calderon and Sasha Vujacic combined for 14 points while Langston Galloway and Jerian Grant had 26.

In game #2, against Atlanta the score was 8-18 for the second unit. In Washington the difference was almost double as G&G outscored Calderon and Vujacic by almost twice as many points, 14-26. The only close battle was against the Spurs where the difference was by just five points – 8-13. The following game against Cleveland the bench had another stunning performance with 26 buckets next to the 14 of the starters while last night they combined for 21. We don’t know how many games Derek Fisher needs before he makes some changes but it’s pretty obvious that the current lineup sucks.

Kristaps Porzingis had another flashy night finishing in double-double with 14 points and 13 rebounds. He did a nice job defending and stayed out of foul trouble. His dunk in the third quarter was another sick move that came in the right moment and made the crowd go wild.


Once again, Carmelo Anthony led the Knicks with 17 points and 6 rebounds, while Derrick Williams, rewarded with 20 minutes on the court contributed with 15 points. The Knicks will make another attempt at winning at home on Sunday when they face Kobe’s Lakers.