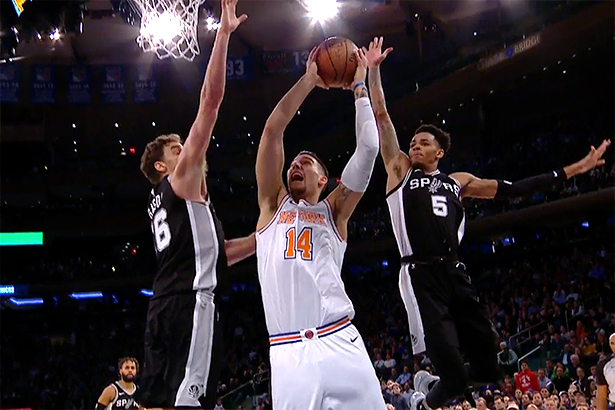 The Knicks opened up 2018 at home, but it felt like they were playing in Argentina, that’s how many fans Spurs’ Manu Ginobili had at the Garden last night.

Prior to the game, he signed autographs, made selfies and chants of “Manu, Manu” could be heard during the game. And the support his fans gave him carried the Spurs to a 100-91 victory.

The game was close in the first half as the Knicks went to the locker rooms trailing by just three points. However, the third quarter proved to be decisive as the Spurs outscored the home team 29-18 and from that points they didn’t let go.

“Teams are starting to figure out more of what we’re doing, what plays we’re running. That’s why we need to execute them even better and maybe we need to find some different options and so on, maybe mix it up a little bit.”
– Kristaps Porzingis

Michael Beasley led the Knicks with 18 points off the bench, including 9 rebounds while the starters finished all of them in double figures. Kristaps Porzingis, Courtney Lee and Lance Thomas dropped 13 points each, Enes Kanter scored 12 and Jarrett Jack added 10 buckets.

The Spurs, however, seemed more energized and more determined on both ends of the floor.

LaMarcus Aldridge, who outplayed Porzingis again, led his team with 29 points while Kawhi Leonard, who played only his seventh game of the season nailed 25 points. Ginobili pleased his audience with 12 buckets including a weird three pointer that was initially ruled out by the officiating team.


The Knicks now dropped to 18-19 and will face a very difficult month of January which can be seen as a real test. Out of the 16 games, twelve of them will be on the road and eight of them will be against .500 or better teams. New York will also play four sets of back-to-back games as noted by MSG.