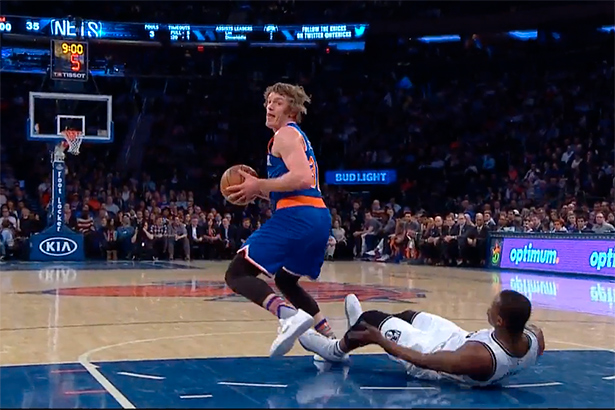 The New York Knicks clinched their fourth straight losing season in the worst possible manner: humiliated at the Garden (121-110) by the worst team in the league, their Nets rivals.

Brooklyn not only that split their single series of the season but they beat New York twice in the same week.

Kyle O’Quinn, who led the Knicks with 23 points and grabbed 8 rebounds off the bench, was visibly upset after the loss.

“It’s tough, you know? A team like that, you look at the roster they shouldn’t be in the gym with us, I feel. But they played hard. And anybody can win. It’s March: Anybody can win in March.” [Source]

The Knicks led by 11 points in the second quarter but the Nets took them by storm in the third act outscoring them 38-26 after shooting 6-9 from behind the arc.

Brook Lopez scored 24 points for the Nets while Derrick Rose had 22 for the other side.

Lance Thomas, who started for injured Kristaps Porzingis, was the only Knick in double-double with 15 and 10.

Failing to connect 2 wins, New York will go on a west coast trip to play the Clippers, Jazz, Trail Blazers and Spurs.