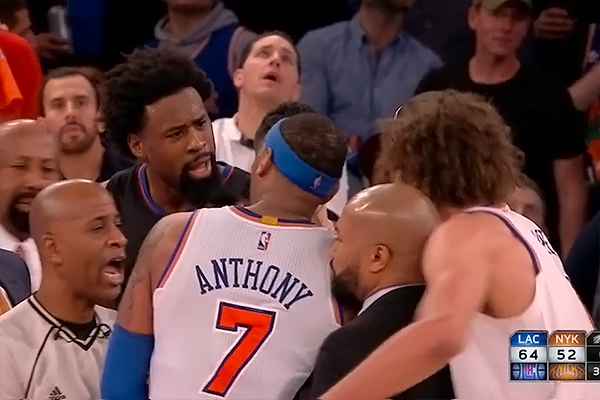 DeAndre Jordan was putting up a slam dunk show at the Garden and after two and a half quarters things heated up. Down by 12, trying to grab an offensive rebound, Robin Lopez smacks Chris Paul‘s face, blooding his lower lip. Things escalated, Jordan got in the mix and Lopez shoved him resulting in him being ejected and forced to watch the game from the locker room.

While the Knicks never led until the incident but managed to cut the lead at 5 earlier in the third quarter, the brawl didn’t turned things around and instead of becoming the key point of a comeback, it pushed the Clippers even more to go on a 13-4 run and secure the win.

On the Knicks side, Carmelo Anthony had 16 points and most of them were made from the free throw line. Carmelo took just 12 shots and made 4 of them, one from behind the arc. Kristaps Porzingis wasn’t more inspired as he made the same number of shots out of which 2 were from long range.

“The game got away from the start. We weren’t ready to play against this team tonight. They were physically faster and better.”

The Knicks fall again under .500 and tonight they will play the Hornets in Charlotte.