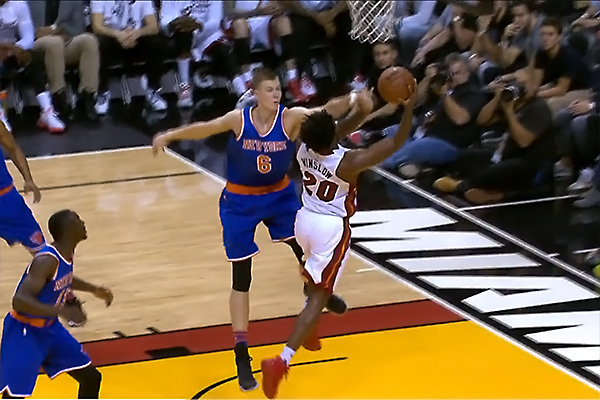 After going on a 4 game winning streak (including 2 wins over Western Conference teams), the New York Knicks dropped in Miami 78-95 against a Heat team that came well prepared and with their homework done.

Kristaps Porzingis was studied well before the matchup and got extra attention from his opponents who vowed to keep him out of getting easy shots.

He’s really good on the elbow area. From what I’ve seen, a lot of guys are falling asleep on that elbow area and it allows him to get catch-and-shoots.

However, that didn’t stopped him to fill up the stats sheet again, as the Latvian rookie finished the game with another double-double of 20 points and 14 rebounds.

New York started strong as they got a 17-13 early lead with Porzingis scoring from behind the arc, while Jose Calderon and Robin Lopez contributing with the jumpers and easy shots forcing Erik Spoelstra to call timeout.

The Heat returned on the court red hot and went on a 17-2 run as the Heat bench outscored the Knicks’ second unit 19-0 at halftime, to put Miami up 52-30.

We had to comeback a little bit earlier with some starters in the second period, we didn’t finished that first quarter well. That was when the separation really started to happen and that takes place during the course of a season. You can’t rely on five guys or just the starters or just the guys off bench to get it done, it requires a team effort and we didn’t have that tonight.

The Knicks dropped to 8-7 and have one more stop, Wednesday night in Orlando, before returning to Madison Square Garden where they’ll be playing the next four games.