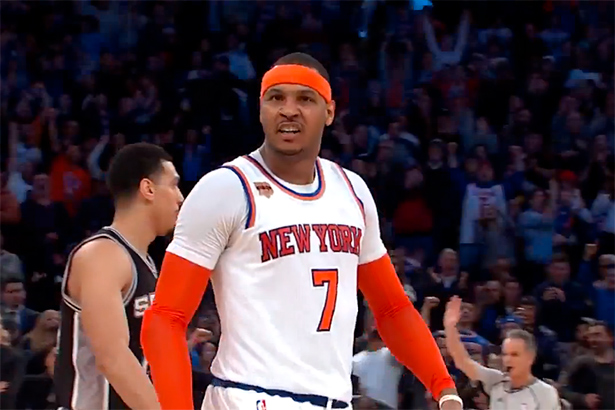 The Knicks had a 3 hour long film session the day before the Spurs matchup. Jeff Hornacek decided that it was time to do this after his team lost 9 of the last 12 games, some of them in embarrassing ways. At the end of the day, he seemed happy about it.

“What I wanted to do was to get them to talk about the tape, instead of us coaches saying, ‘If you were in three feet’ or whatever.  And they were great.”

The outcome was an impressive win at home on Sunday afternoon against one of the top teams in the west, the 5 time champions, San Antonio Spurs.

The film watching might not have been the only motivational factor, as James Dolan, in an attempt to get right with the fans held a reunion of former Knicks from the 80’s and 90’s.

Kenny Walker, Gerald Wilkins, Bernard King, Herb Williams, John Wallace, Larry Johnson, Vin Baker were all present at the game. But there was another former great Knick courtside, Latrell Sprewell. Part of the late 90’s teams that made it into the finals in 1999, Sprewell hasn’t visited the Garden in 14 years. His dramatic return from December 23, 2003, after he was traded to the Timberwolves, was one to remember. Spree scored 31 points in Wolves’ win and cursed James Dolan throughout the entire game. He was eventually finned by the NBA with $10.000.

Last night, Dolan was flanked by Sprewell and King. The only guy missing, Charles Oakley. Spike Lee, however, came at the game rocking an Oakley jersey.

Another motivational factor was the return of Lance Thomas. Thomas missed the last 14 games after a facial bone fracture and although he had just 2 points and 2 rebounds coming off the bench, he did an excellent job in slowing down Kawhi Leonard.

“If you bring it defensively, the energy toughness, you can beat anyone in this league. A win like that shows it. If we bring it like that, there’s no reason we shouldn’t be in position to win every game we play.”

The Knicks held only twice their opponents this season to 90 points or less. The Nets, on February 1st, and the Bulls on January 12th. Yesterday, they did it to the Spurs.

Carmelo Anthony scored 25 points and 7 of them in crunch time, when the team needed him most.

The Knicks trailed by 12 points (48-36) late in the second quarter but then they went on a 6-0 run by halftime and started the third quarter on a 9-0 run, to take a 51-48 lead, for the first time since the early minutes of the game.

With 3:43 on the clock and the score tied at 81, Derrick Rose made a driving lay-up, then Anthony with a three pointer increased the lead at 5. Leonard responded from the free points line making three shots after being fouled on a 3 point attempt.

The final score was 94-90 after a couple of free throws made by Derrick Rose and a last second shot by Manu Ginobili.

Kristaps Porzingis had 16 points and 7 rebounds, Rose scored 18 while Hernangomez, on his second start of the season dropped 12 points and 9 rebounds.

The Knicks (23-33) will play the following games on the road and will not return to the Garden until after the trade deadline which raises the question if this was Anthony’s last game as a Knick at home.