Don't Miss
Home / Recaps / Out of control and out of punch, Knicks lose by 28 to Celtics

Out of control and out of punch, Knicks lose by 28 to Celtics 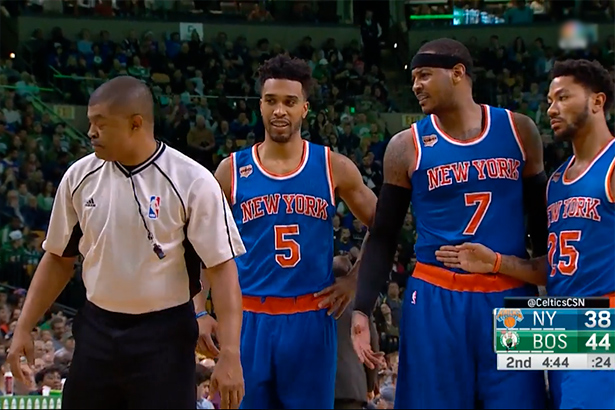 The Knicks have yet to win consecutive games this season. All the three wins so far were followed by at least one L. The other night, at the TD Garden, the pattern was the same.

Late in the second quarter, when his team was down by 6, Carmelo Anthony was ejected by referee Tony Brothers after arguing  a foul call. His second technical came few seconds after his first as Courtney Lee tried to convince Brothers that he was the one who should have gotten it.

New York managed to keep the margin by 10 until late in the third, when the Celtics started to double all the points the Knicks scored. As a matter of fact, New York was outscored 14-29 in the final quarter as the Celtics won their fourth game of the season, 87-115.

And as if things couldn’t go even worse, with 3:20 on the clock, Brandon Jennings was also ejected after receiving two technicals. The first one for slamming the ball against the stanchion, the other one, right after for arguing. Per total, the Knicks accumulated 6 technical fouls.

On the bright side, Willy Hernangomez continues to confirm, and finished with 8 points and 12 rebounds. Kristaps Porzingis was the high scorer for the Knicks, with 14 points. Joakim Noah was one point away from a double-double and contributed with 9 points and 10 rebounds.

Boston CelticsBrandon JenningsCarmelo AnthonyrecapTony BrothersWilly Hernangomez
← Previous Story Dominated by their rivals, the Knicks pull a comeback to beat the Nets, 110-96
Next Story → Knicks show a different effort against the Raptors but still can’t get the win