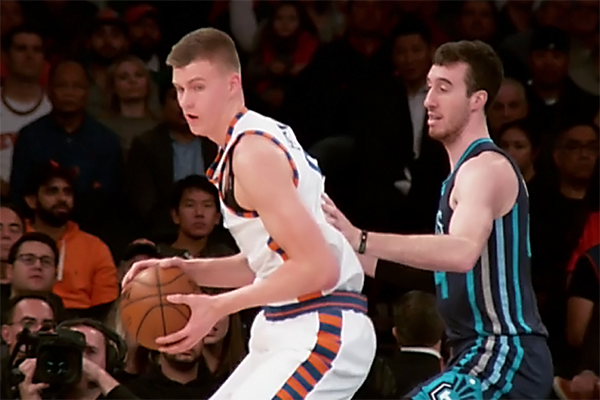 Kristaps Porzingis overcame after a rather faded performance against the Pelicans and scored a season high 29 points as the New York Knicks revenged last week’s loss in Charlotte and won 94-102 to get back at .500. Porzingis also had 11 boards for another double-double! The Latvian rookie impressed Patrick Ewing who spoke to the New York Post on how the game of basketball has changed.

Now you have 7-3 guys who play like small forwards

The Knicks trailed by 8 points in the second quarter but came back strong in the third and after a couple of threes by Carmelo Anthony and Porzingis they kept on going.

The thrills returned later in the fourth, when after getting a 13 points lead with 5:54 left to play, New York went scoreless for almost the entire remaining time, allowing the Hornets to close the gap at 4 with more than 2 minutes on the clock. Luckily for the Knicks, Nicolas Batum and Jeremy Lamb went 0/4 from behind the arc and allowed Porzingis and Anthony to seal the game from the free point line.

Kevin Seraphin had another solid game with 10 points and 5 rebounds in 20 minutes coming off the bench while Langston Galloway outscored Jose Calderon by 1 point and finished with 9 points and 5 assists.

The Knicks will return at Madison Square on November 27 to play the Heat, after they complete a road trip that includes Oklahoma City, Houston, Miami and Orlando.