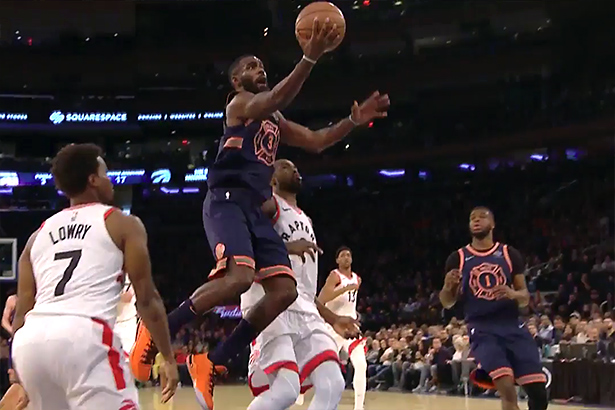 The New York Knicks have returned to the Garden only to get blown out by the Toronto Raptors, in a game which was decided, once again, in the second half. The Raptors outscored the Knicks by 17 points after they already took an eight point lead at halftime, and defeated their rivals 132-106.

With Enes Kanter sitting with back spasms, coach Jeff Hornacek started for the first time this season with Luke Kornet. Out of the other four starters, Tim Hardaway Jr. was the only one who was in the original lineup when the Knicks were still a winning team.

Kornet played 34 minutes and scored a season high 18 points, shooting 7-15 from the field. Seven of his points came early in the first quarter. Hardaway finished with a game high 25 points while Michael Beasley was in double double with 10 points and 11 rebounds.

Toronto was led by Jonas Valanciunas with 17 points and 9 rebounds, Kyle Lowry scored 16 while Serge Ibaka had 14 points.

“We weren’t good on the ball. They got open looks and they made them. It’s a challenge to keep a guy in front of you. You got to slide your feet, and it’s not easy. They really attacked us on that end.”

The Knicks have now dropped 24-43, losing their 15th game in the last 16 and have 15 more games to play until the season ends, plenty of games for Hornacek to play the youth and increase the chances of a good lottery pick.