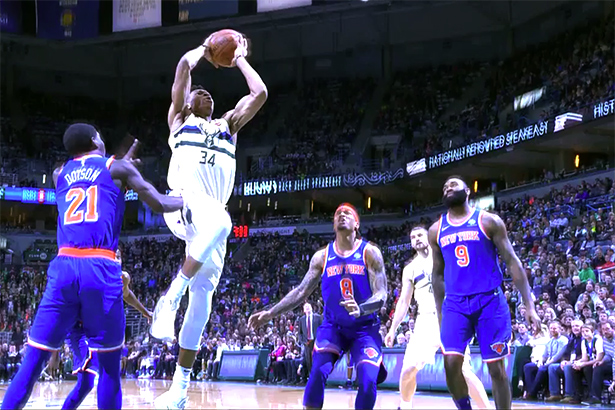 Tim Hardaway Jr, scored 26 points and Troy Williams added 18 off the bench but the Knicks had a hard time in Milwaukee as they couldn’t stop the Greek Freak to steal the show.

Antetokounmpo scored 13 of his total 28 points in the fourth quarter giving the Bucks a 120-112 win at the BMO Harris Bradley Center. He also posted 10 rebounds and dished 5 assists.

The Knicks played a competitive game throughout the first three quarters, trailing by just two points before the last act. It was the moment when Antetokounmpo made the difference and Milwaukee outscored the Knicks 23-29.

“He’s really worked on his body. Now, he’s a lot stronger. It’s a maturity and growth in the game that makes him a great player. He’s hard to stop.”

Williams impressed with his performance as he dominated the first half when he scored his first 13 buckets, shooting 5-7 from the field.

The Knicks trailed by as many as 15 points before they attempted a comeback which nullified Bucks’ lead and even put them up in the lead for a short period in the third quarter.

However, they end their four game road trip winless and have won only once in their last 15 games.