With Carmelo ejected, Knicks take it into OT but lose 98-102 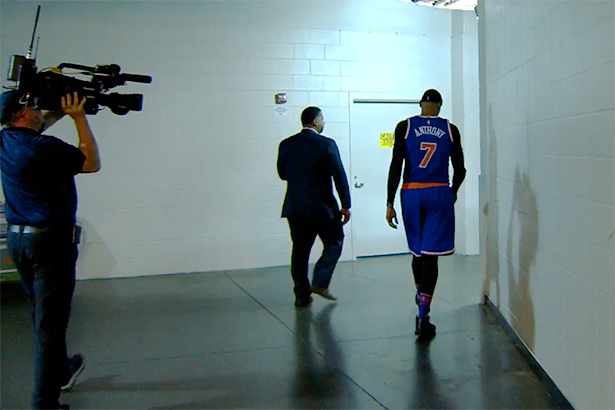 With just over 3 minutes until halftime and down by three, Carmelo Anthony delivers a blow to Thabo Sefolosha‘s face and gets ejected with a flagrant foul 2 after the referees review it.


With their superstar out, coach Jeff Hornacek relied on Justin Holiday to fill in for Melo, and in the minutes remained, New York forced a 9-2 run to take a two point lead before the start of the 3rd quarter.

Unlike the previous games, the Knicks played a super-strong defense, keeping their opponents under 90 points at the end of regular time. However, shooting dropped dramatically as both Kristaps Porzingis and Derrick Rose failed to deliver when it mattered most, as the Knicks fell 98-102 in over time.

The officiating was highly questionable as a couple of strange decisions against KP were taken in extra time. First, he was called for an offensive foul after Dennis Schroder defended too close as Porzingis was driving to the hoop. At the next play, Paul Millsap knocked down Porzingis with his elbow in a similar play, which resulted in an easy dunk by Howard and no call from the refs.

The Latvian sophomore would get back at Millsap with a sensational block on a layup and a put back dunk after Brandon Jennings‘s three pointer hit the rim.

Up by one, the Hawks missed a shot with 15 seconds left on the clock to give the Knicks a chance to take the lead. But Rose turned the ball over as he dribbled into two defenders and allowed Schroder to increase Atlanta’s lead by three after making a couple of free throws.

With 3.6 seconds to go, Porzingis got fouled on a 3 point attempt and as he missed the first, made the second and intentionally missed the third, he got called for a lane violation as he rushed to grab his own rebound without waiting for the ball to bounce.

Rose led the Knicks with 26 points, 7 rebounds and 6 assists shooting 33% while Porzingis had 24 points and 8 rebounds.

Joakim Noah had a stunning game, showing a glimpse of his potential after playing a season high 38 minutes, scoring 14 points and grabbing 16 rebounds. Still, he was outplayed by Dwight Howard who ended up with 22 boards.