Knicks fail to comeback, lose to Celtics on Christmas day 119-114 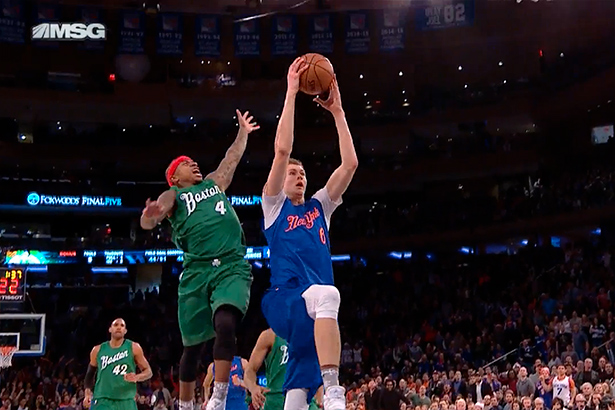 Kristaps Porzingis with the layup and the foul / MSG Capture

The Christmas day games have always been special at Madison Square Garden. On a playoff-like atmosphere, the Knicks tried to hold on to their court but two comeback attempts have failed against the Celtics rivals.

Down by 10 in the middle of the third quarter, Carmelo Anthony got hot from the field and scored 11 of his total 29 points, during a 14-6 Knicks run that cut the lead to just a couple of points.

The Celtics would quickly build the double-digit lead again, with Kelly Olynyk scoring 16 points off the bench out of which 14 in the second half.

The second comeback attempt happened when nobody expected, with 2 minutes to go and with Boston leading 110-101. Anthony nailed a three pointer then Kristaps Porzingis made one himself. As Isaiah Thomas missed a 25 foot three pointer, Porzingis got the ball off Derrick Rose‘s rebound, then ignited on a coast-to-coast run for a layup and a foul, to tie the game at 112.

The loud crowd was silenced on the next play when Marcus Smart – who earlier was spitting blood on the court after getting elbowed by Rose on a layup – got a wide-open pass and drowned one from behind the arc, to which the Knicks found no answer. Anthony missed a three pointer with 30 seconds left, Joakim Noah managed to save the ball and send it back to Melo but he turned it over as he dribbled into the corner.

Celtics walked away with a 119-114 Christmas day win as the Knicks dropped to 16-14.  Rose scored 25 points while Porzingis logged a double-double with 22 buckets and 12 boards. Noah finished the game with 8 points and 12 rebounds while Courtney Lee had 11 points.