Without Carmelo, Knicks lose to Rockets in OT 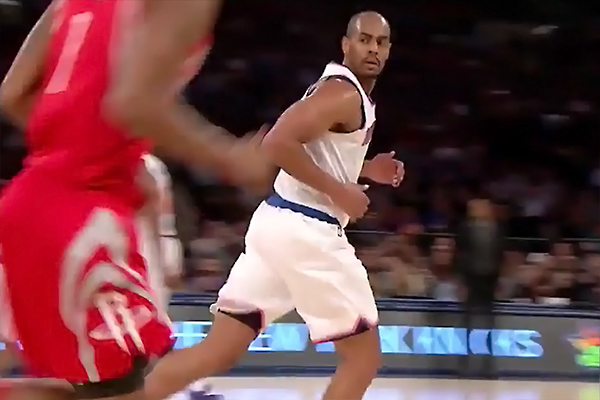 Without Carmelo Anthony who missed the game due to illness, the New York Knicks seemed to have had this game in hands as they controlled the Houston Rockets throughout mostly of the regular time.

Lance Thomas replaced Carmelo in the starting lineup and had a solid game scoring 15 points while shooting 6-10 from the field and 2-2 from the free throw line.

With Arron Afflalo scoring a season high 31 points and Kristaps Porzingis heading to another double-double, it was hard to believe the Knicks would blow a 14 point lead with 8 minutes to go in the fourth quarter.

Marcus Thornton and James Harden missed each a three pointer while Jose Calderon turned the ball over, and Dwight Howard’s rebound allowed Thornton to take another shot from behind the arc to tie the game and send it to overtime.

The extra time started in the worst possible way for the Knicks as Dwight Howard’s alley-oop with both hands over Kristaps Porzingis made a statement on where the fate of the game is heading to. Although Porzingis responded quickly with a layup shot as nothing happened at the previous play, he didn’t attempt any other shot for the rest of the remaining time.


He dunked on me, he got me. I was asking the guys, ‘When is the next game against Houston?’ But I got to wait until next season. It happens. He’s a great player.  I’m looking toward playing next time against him.

While the Knicks had an answer for every shot made by their opponents, Trevor Ariza‘s last three pointer had no reply from the other end as Calderon’s attempt with 7 seconds to go, allowed the Rockets to secure the ball, and the victory. Final score 116-111.

After being inactive since November 10th, Cleanthony Early returned on the court for about 6 minutes but went empty handed, missing his only shot. Kristaps Porzingis finished with 20 points and 13 rebounds. Kevin Seraphin managed to score 14 points and grabbed 7 boards off the bench while Derrick Williams added 12 buckets.

The New York Knicks are now 0-4 in the last four games and fell to 8-10 but they follow a couple of easy ones at the Garden against the Sixers and the Nets.