Don't Miss
Home / Uncategorized / Can the Knicks Save their Season & Get Into the Playoffs?

Can the Knicks Save their Season & Get Into the Playoffs? 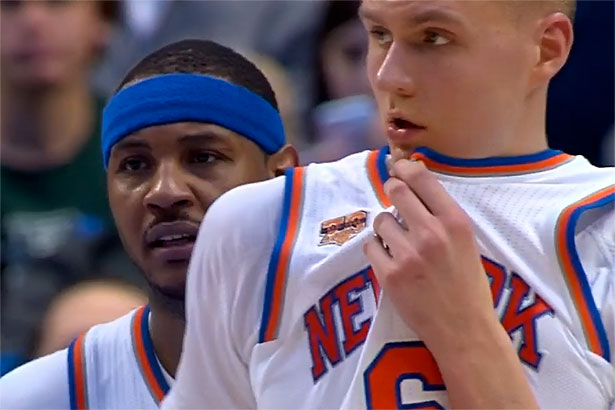 The NBA regular season is slowly but surely coming to an end so it’s time for teams to start looking ahead to what could happen in the next few weeks.

Some teams wonder if they can make the playoffs, others ponder if they should tank to get a high draft pick and take a player that can turn around their.

The New York Knicks are a mess, they have been like that for a few years and right now they’re in a weird position because they can still reach the playoffs but tanking could be their best move.

The Knicks currently have a 26-41 record and they’re six point five games behind the Bucks  for the last playoff spot in the weak Eastern Conference and with 15 games left, there’s still chance if they somehow manage to put together a decent winning streak. It’s highly unlikely since they haven’t won two in a row since December.

The team waived backup point guard Brandon Jennings after the All Star break because he wanted to play for a contender, which is understandable and after one game with his new team, the Wizards, he said they’re ‘a team that actually plays together.’

Jenning’s affirmation speaks volumes about the state of the Knicks and it doesn’t seem like many of their players this season are happy at all. Carmelo Anthony hasn’t been afraid to voice his displeasure with certain aspects of the organization, particularly with how team President Phil Jackson runs things.

To make matters worse, starting center Joakim Noah underwent knee surgery and will miss the rest of the season. So what should this team do? Will they consider resting Carmelo Anthony like they have done in previous seasons? Should they look at the buyout market and add someone to make a playoff push? They didn’t make a trade before the deadline and tanking is also under consideration but the Knicks themselves don’t know what kind of team they are right now.

Head coach Jeff Hornacek said that they plan to implement the triangle offense one more time and see who performs well and who doesn’t and go from there, but this is a team that has bad luck and they have made bad decisions for years, which is something that still backfires them.

At this point, what they need to reach the playoffs is a series of miracles. Kristaps Porzingis has to stay healthy for the rest of the season, Carmelo Anthony has to continue scoring like he has over the last 10 games (25.8 points per game), Derrick Rose has to find his place and deliver more assists and the team has to adjust the offense enough late in games and find a way to fix their porous defense in fourth quarters, which has cost them way too many games.

BetOnline odds for the Knicks have them at +10000 to win the Eastern Conference. There’s hope to get that last playoff spot and fight, at least mathematically, but I’m not sure that they have what it takes, especially after their performance in Sunday’s 120-112 road loss against the Nets. The Knicks were massacrated at both ends and couldn’t get the job done, which sums up their season.

The Knicks have a little margin for error and players like Carmelo Anthony don’t want to tank. “I don’t believe in tanking,” Anthony said after the loss against the 76ers earlier this month.

“I don’t think that’s right. I don’t agree with that. Until we’re statistically out of the playoffs, I think we still have a shot.”