Don't Miss
Home / Columns / Is Carmelo the best thing to happen to the Knicks lately – and why are they ready to let him go?

Is Carmelo the best thing to happen to the Knicks lately – and why are they ready to let him go? 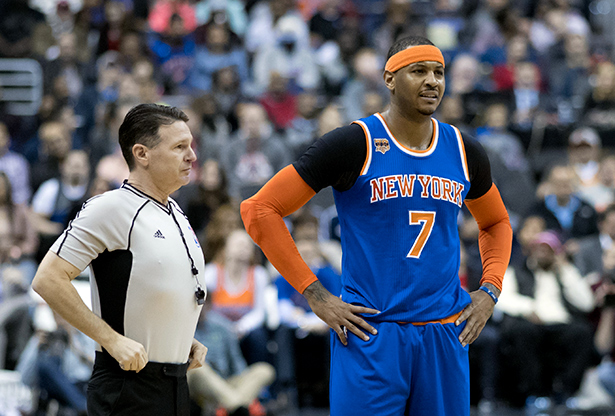 It’s no secret that the New York team has gone through some dark times lately. Struggling to reclaim their former glory, the Knicks have not yet demonstrated their ability to successfully rebuild around a consistently strong roster, despite numerous efforts in the last few years. While Jeff Hornacek has been behind the wheel for almost a year now, things do not seem to be improving for the legendary team.

And to make things worse, rumors have been circulating lately that the Knicks might be voluntarily giving up the player that has been a trump card up their sleeve for the past six years: Carmelo Anthony.

While Phil Jackson has mildly criticized him throughout the second half of this season, it wasn’t until a week ago that he actually made it quite clear that the option to trade Carmelo is on the table.

Anthony himself seems open to the idea, that would include him waiving his no-trade clause – which he appears willing to do if the Knicks come up with a desirable proposal.

The Knicks have undoubtedly had some quite strong players in the past few years: Amar’e Stoudemire, Tyson Chandler, even Jeremy Lin’s unexpected “Linsanity” era have all left fans more or less content. But if Melo hadn’t shown up, the Knicks would still be struggling to regain their confidence.

Carmelo showed early on that he is a force to be reckoned with. In the first year he arrived, he led the Knicks during their annus horribilis of injuries and upheaval to their first playoff win since 2001.

The 32-year-old has consistently been breaking records – including one set more than 50 years ago. In 2013, he became the first Knicks player since Bernard King to score 40+ points in three consecutive games and only the third NBA player to score at least 40 points on at least 60% FG shooting in three consecutive games, a feat until then exclusive to the likes of King and Michael Jordan.

In 2014, he set the Madison Square Garden and Knicks’ single-game scoring record with a career-high 62 points.

Melo is a superstar, no doubt about it. He boasts a high record of being picked for the All-Star teams (he has been chosen 10 times) and even prides in four Olympic medals under his belt – three of which are Gold. Even more than what this says about Melo’s abilities in the game, it means that he has been a source of confidence for his teammates and coach alike, who know they can always rely on his skills.

In 74 games this season, Anthony, who still has two years’ worth approximately $54 million left on his contract, has demonstrated an average of 22.4 points, 5.9 rebounds and 2.9 assists. It is widely accepted that since he arrived on the scene, the Knicks have done much better. Even with this year’s losses, you can currently find odds at major betting sites that are unprecedently favorable, something the Knicks would have never dreamt of before Melo.

But there is also criticism. Has Carmelo been dominating the scene, as many fans nag, leaving no room for talented players like Porzingis to develop?

Although Melo gave the team a desperately needed confidence boost, it was by no means a match made in heaven: the Knicks seemed to rely too heavily on Carmelo, neglecting to develop other players around him that could take over once he was gone.

Meanwhile, Anthony’s time at the team did not allow him to achieve major wins and he seems to be disoriented lately – having also reportedly some personal drama to deal with in the last couple of days…

All in all, it feels like Carmelo kept carrying a struggling team on his shoulders – and the Knicks need to learn to stand on their own if they are to restore their once glorious name. So perhaps it is the right decision for both to break up now and on friendly terms, before both sides get tired of this dysfunctional relationship.