Don't Miss
Home / Columns / Whom should the Knicks sign during upcoming offseason? 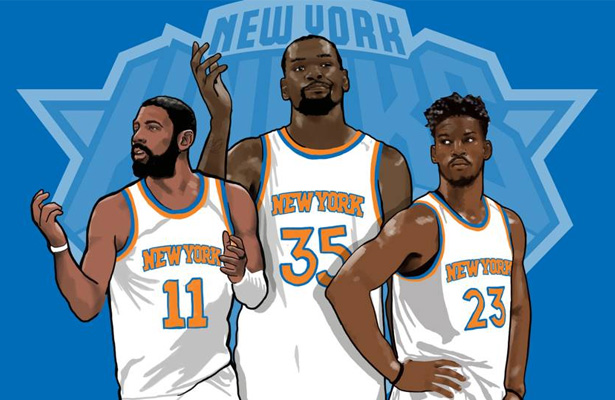 After clearing cap space, thanks to Kristaps Porzingis being traded, Knicks’ payroll for 2019-2020 has a total of $35,245,579. Since the salary cap is expected to rise to $109 million next season, NYK are in position to sign a superstar or two. Hence, lets break down top 3 leagues’ superstars that are eligible to become free agents on the upcoming trade window:

Kevin Durant was selected by Seattle Supersonics in 2007 draft and spent nine years with the relocated Oklahoma City Thunder.

During this spell he made his way to the Finals in 2012 but got hammered 4-1 by the Miami Heat. After a string of unsuccessful tries in the following years Durant has decided enough is enough and joined the team that beat OKC in the 2016 Western Conference finals – the Golden State Warriors. Since then he has won back-to-back titles with them and was named both times the Finals’ MVP.

Hence, there is still a thing for KD to prove, namely that he can be a cornerstone of the franchise instead of one of the cogs in Steven Kerr’s machine. Madison Square Garden, the electric crowd full of celebrities and tons of cap space available to work with is something you have to think when you enter the final year of your contract, especially if you already have a ring or two.

Kyrie Irving was reluctant to commit verbally to the Boston Celtics when asked about his decision during upcoming offseason, replying: “ask me July 1st“.

Knowing how turbulent things have been for Kyrie and Boston during past year it will be no surprise if Uncle Drew decides to look for a team elsewhere.

Likewise KD, Kyrie already has a ring and is a super star caliber player with variety of NBA2K player moves. Pairing these two seems like a dream come true for some fantasy draft enthusiasts and this might be the year when the dream may become reality.

Signs that Kyrie has matured by apologizing to Lebron James signifies that he no longer wants to take a burden of being the sole leader of a team and if you are willing to play him along with a guy as KD it could be a nice fit.

With the Claw you never know what is on his mind but one thing is clear and this is the fact that Kawhi will sign a max contract during this offseason.

Toronto can offer him one but knowing that he has recently bought a house in Southern California that outcome is not very likely to happen. However, since that new house is located in a three hours drive from where Clippers have their practices, this argument leads to the idea that maybe this purchase does not mean that much.

Thus, New York can try to sign him as well. The only problem is that Kawhi is not the flashiest player in the world. On the contrary, he is highly conservative by preferring to shoot mostly 2 pointers in a 3pt dominant era, despite of having a solid percentage from the outside the arc (36.3% this season and 38.3% career). What makes him stand out is his defensive abilities, high percentage post up plays and high basketball IQ.

After all, building your franchise around a player with such skill set is a great idea to go for but will he be willing to go for it as well?

Whatever is the outcome of the upcoming offseason trade window one thing is certain: building a NBA super team is not an easy task to do and building a championship winning super team is something that only a chosen cohort of teams have done. Will Knicks become one of them or will they continue the trend of signing super stars and wasting their talent? That is something that only time will show.

← Previous Story 2018 Top 10 Draft Summary and Explanation
Next Story → Mitchell Robinson: are we seeing a major star developing for the Knicks?