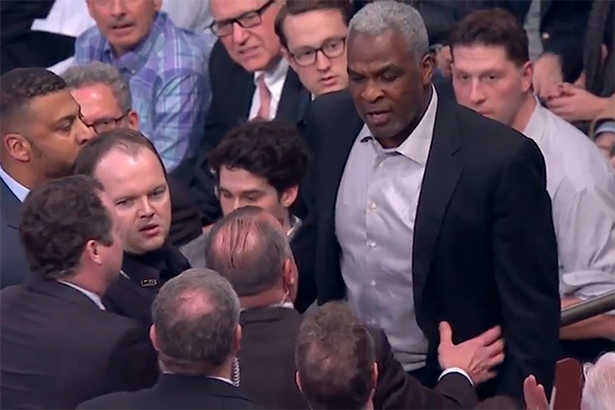 An iconic figure of the 90’s Knicks, Charles Oakley will always be remembered for his toughness and the pride he had played with while wearing NEW YORK on the chest.

Last night however, present at the Knicks – Clippers game, he was removed from the stands by security, escorted outside, handcuffed and arrested for “inappropriate behavior” and “completely abusive manner“.

Between him and the organization, the relationship after his trade to the Toronto Raptors in exchange for Marcus Camby in 1998, was never the same.

Oakley feuded with chairman James Dolan for the years to come and of the many Knicks alumni, he is the only one who has never been welcomed at the Garden.

According to CBS News, Oakley purchased tickets for the game and was seat behind James Dolan to whom he made comments. Dolan called the security who asked Oakley to leave. The 53 year old refused and an argument started which ended in an arrest.

Oakley on the other hand defended himself in an interview, saying that he was there for four minutes with four friends, wanting to enjoy the game when security approached him and asked him to leave the building because someone ordered him to leave.

Charles Oakley was acquired from the Chicago Bulls in 1988 in exchange for Bill Cartwright. He played 10 straight seasons for New York and in 1994 he made his single All Star appearance and also helped his team going all the way to the NBA Finals. He started in all the games of the 1994 season (82 in the regular season + 25 in the playoffs) and according to Wikipedia, he still holds that record.