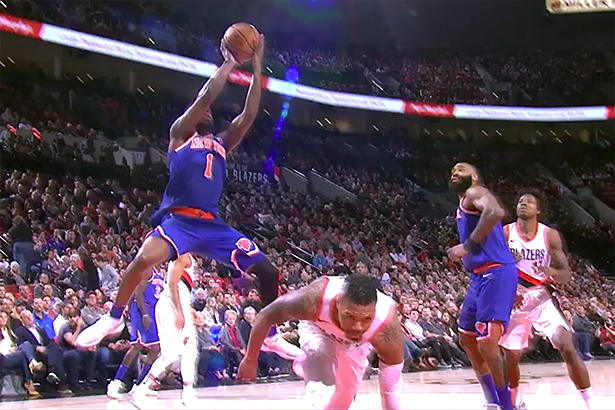 The Knicks continue to fight for a good lottery pick but last night the energy and the excitement was only on their opponents’ side. Portland outscored New York by 18 points in the second half and took an easy 111-87 win at Moda Center.

Head coach Jeff Hornacek made another adjustment to his lineup, and for the first time this season, he started french rookie Frank Ntilikina, having Michael Beasley come off the bench for the first time since the injury of Kristaps Porzingis.

The change in the lineup was rather determined by some bad news, Courtney Lee leaving the team prior to the game because of a death in his family.

Ntilikina logged 28 minutes and scored six points as a shooting guard although he was drafted for his point guard abilities. He shot just seven times and made two field goals in spite of playing some pretty good defense.

Tim Hardaway Jr. scored 19 points, Enes Kanter was in double double with 18 points and 11 rebounds while Brasley led the bench with 16 points.

The Blazers, who won their eighth straight game, were led by Damian Lillard who torched the Knicks with 37 points. Lillard, who is averaging 26.8 points has become the talk of the league lately after putting his team in third place in the Western Conference.

“The guy is playing fantastic. He might be one of those guys you’ve got to start talking about that MVP too with the way he’s playing.”

The Knicks on the other hand, lost their 5th straight game and are 1-13 on their last fourteen games.