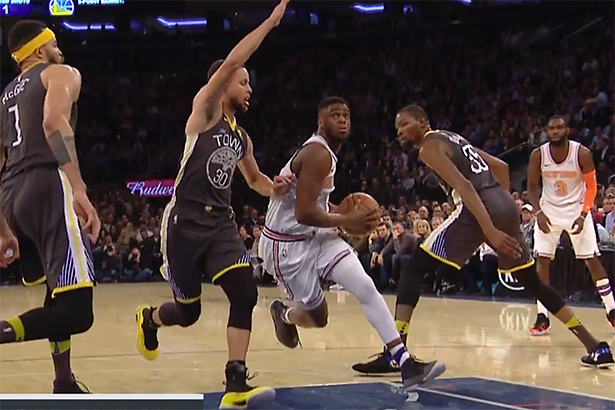 And to set things straight, by short we mean that they weren’t blown out. In fact the first half of the game was extremely disputed, with the lead changing ten times.

The Knicks were leading by one at halftime but as soon as the third quarter opened, the Warriors went on an 11-0 run and from that moment on, it was all Warriors. In the end, they took a 125-111 victory at the Garden.

“They are a great team. The first half, we moved the ball well, but in the third quarter, it was like, ‘How can I score?'”

Coach Jeff Hornacek continues to give solid minutes to the young players, and with his third start, Emmanuel Mudiay scored a team high 20 points, to which he added seven dimes.

Trey Burke, who led the Knicks in scoring in the last two matchups finished with just two points and two assists behind Mudiay while Frank Ntilikina added 13 points.

The Warriors were led by Klay Thompson with 26 points while shooting 9-13, followed by Kevin Durant with 22 points and 9 boards. Steph Curry scored 21.

The Warriors are closing in on the Rockets with just 0.5 games behind them after losing the first place in the Western Conference while the Knicks  take a step closer to the lottery dropping 24-38.