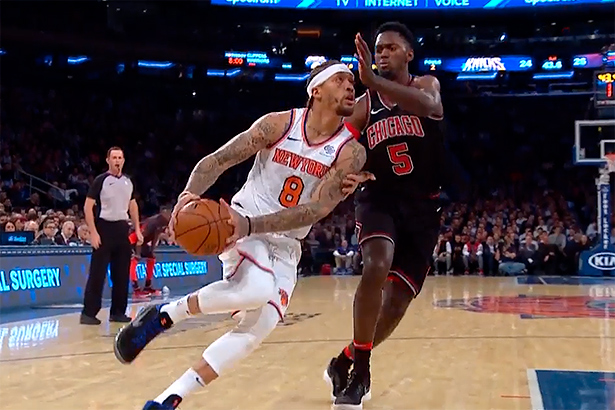 It should have been Jarrett Jack’s night. But his night was spoiled by his own turnover from the last minute of the second over time period and by the missed three pointer that he attempted on Knicks’ last possession.

Jack, who received a guaranteed contract for the rest of the season just two days earlier, finished with 16 points, 10 rebounds and 10 assists for his first triple double in six years but wasn’t thrilled about it at the end of the game.

Bulls’ rookie, Lauri Markkanen, sparked Chicago’s third win over New York by hitting couple of free throws with 6.8 seconds left to play and logged a career high 33 points.  His two free throws were made as the Bulls were leading 120-119, after Kristaps Porzingis had just made a three pointer. With no timeouts left, the Knicks advanced the bal, gave it to Jack, who clunked the shot with 2.8 on the clock and the Bulls a 122-119 victory.

Michael Beasley led the Knicks with 26 points off the bench, and recorded a double double as he also collected 10 boards in 39 minutes after returning from an ankle injury. Beasley was extremely effective in regulation, but went 0-4 in OT.

The Knicks are now 0-3 against the Bulls and have dropped 19-22. They are also 2-4 in the last six games that were decided by 4 points or less.