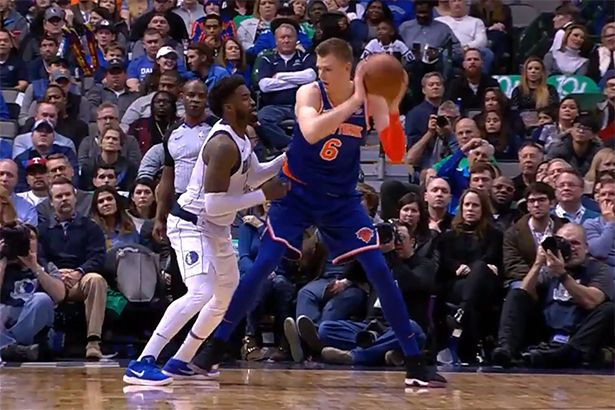 Visiting the Mavericks, with a horrible road record of 3-14, the Knicks were desperate for a win against a losing team.

A couple of good things happened on game day:

1: Jarrett Jack was not released and instead was given a guaranteed contract by the Knicks.

2: Former Knick, Derek Harper, was honored by the Mavericks as he saw his number retired to the rafters. Harper, who played most of his career for Dallas, was a key player of the 1994 Knicks team that made it all the way to the NBA Finals, and what a great moment have they chosen to honor him, on the night the two teams he played for the longest time in his career met.

The Knicks started the game on a 8-0 run and then continued to rule the Mavs throughout the rest of the game. In fact, the Knicks never allowed their opponents to take the lead even though they were damn close of doing it in the closing minutes.

Trailing by as many as 13 points with under five minutes on the clock, the Mavs tied the game at 92 in a span of 150 seconds, when they forced a 15-2 run.

But the killer shot came from Jack, who drowned a crucial 11 foot jumper with 31 seconds left, that put New York up by two and eventually sealed a 100-96 win.

In what was regarded as a highly anticipated moment, two of the most interesting rookies faced each other, after earlier this season LeBron James made some comments that basically said Phil Jackson made the wrong pick. Frank Ntilikina outplayed Dennis Smith Jr, although they did not shared the court  for too long. The french-ise finished with 7 points, 5 assists and 7 boards in little over 25 minutes while DSJ scored 11, dished 5 assists and grabbed 3 rebounds in about the same amount of time.

The Knicks were led by Kristaps Porzingis who returned to the good shape and scored 29 points while collecting 8 rebounds.

“That would’ve been pretty heartbreaking if we didn’t win this game.”

Enes Kanter logged a double double with a game high 18 rebounds and 13 points, Jack scored 13 and was 2 assists away of his own double double while Courtney Lee added 11 buckets. Off the bench, Kyle O’Quinn had a monster game with 15 and 11, while Doug McDermott dropped 9 points.

The Mavs were led by Harrison Barnes with 25 points, followed by Wesley Matthews with 14.