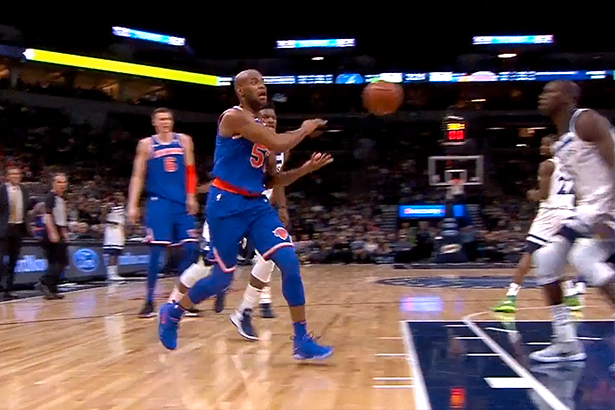 After missing 20 games due to his left foot stress injury, Tim Hardaway Jr. has finally returned to action. Against one of the top teams in the Western conference, this was a real test for the Knicks on the road.

The Wolves have never beaten the Knicks since drafting Karl Anthony-Towns, but under Tim Thibodeau, their team has gone from lottery to a legit playoff contender.

With the return of THJ, the Knicks hoped that the L column vs Wolves will remain at zero, and for the first three quarters of the game, that seemed to be a tangible objective. New York were up by three at the end of the first quarter and by 2 at halftime. After the third, the score was tied but the decisive act found the Knicks unable to keep up the tempo and admitted the defeat, 108-118.

Hardaway, who came off the bench, played 25 minutes, scored 16 points, had three rebounds and a couple of steals and blocks. He also marked a team high plus- rating of 11.

“I feel good. I had a little burst of speed here and there. It was just great to be back out there, get my feet wet, taking hits, taking bumps, finishing at the rim, knocking down jumpers, just trying to do whatever I can to help the team.”

Kristaps Porzingis scored 17 points after playing over 44 minutes two nights before, against the Bulls. KP shot 3-5 from long distance but he struggled from inside the arc, going just 3-14. In spite of the difficult time the Knicks are going through, having lost 9 of their last 11 games, Porzingis still believes that they can get back on track.

“I think the mood we have now is based off of those close losses we had; three times to Chicago, Detroit and Miami. We’re in a bad moment right now but like I said we’re going to get out of it.”

Jarrett Jack continues to shine after getting his contract guaranteed, and after his triple-double performance from his previous game, last night he dropped 18 points and 8 assists. Emes Kanter logged a double double with 16 points and 12 rebounds while Courtney Lee added 14 points.

Michael Beasley’s role is unclear with the return of THJ, but he still received 16 minutes, time in which he scored 13 points, shooting 6-8 from the field, and three assists. Kyle O’Quinn delivered 12 points and grabbed 6 boards.

For the home team, all the players that shared the court scored in double figures, except Tyus Jones, who had only 7. Karl-Anthony Towns scored a game high 23 points and collected 15 rebounds. Taj Gibson put 17 points on the scoreboard, Andrew Wiggins added 16 and Jimmy Buttler dropped 13.

Towns was the sole starter on the floor at the start of the fourth quarter, and alongside four bench players, he managed to crack the Knicks defense and give the Wolves their 28th win of the season.

Meanwhile, the Knicks dropped 19-23 and will return to Madison Square Garden on Sunday afternoon to host the Pelicans, before embarking on a 7 games road trip that includes six matchups against Western Conference teams.