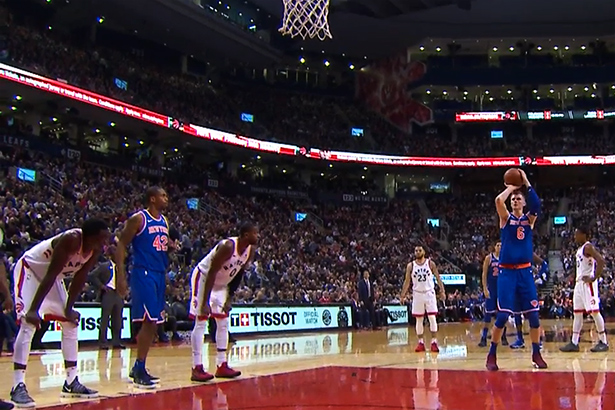 Knicks last success on the road dates October 29, when they defeated the Cavaliers, 114-95. Since then, they only played one away from Madison Square Garden and lost to the Magic.

Last night, in Toronto, the Knicks got a reality check from the team they weren’t able to beat in quite a while and got blown out, 84-107 as the Raptors won their eight straight game against New York.

The Orange & Blue couldn’t score more than 18 points in each of the first two quarters and found themselves trailing by, coincidental, 18 points at halftime.

In the second part of the game, the Knicks attempted a comeback and managed to cut the lead to 10 early in the fourth quarter. But the Raptors’ reply was stone cold and in a span of 7 minutes they increased their lead to 25, securing their 10th win of the season.

The game proved once again how vulnerable can the Knicks be when Kristaps Porzingis isn’t playing at the highest level. Porzingis struggled from the field, shooting 3-13 and finished with 13 points, to which he added 4 blocks. His first points came late in the second quarter when he made a 23 foot jumper, off Jarrett Jack’s assist.

“I think we were a little too stagnant offensively early on. We were kind of waiting: Now it’s my turn. Now it’s my turn. We weren’t playing our basketball. It was us missing a lot and struggling to find our rhythm and of best position to attack from. It was a rough night for us.”

Tim Hardaway Jr. finished with 13 points and 5 rebounds before leaving the court in the third quarter with a sore left foot. Fortunately, the X-Ray came negative but his status is uncertain for Monday’s game against the Clippers.

“When I woke up Thursday, it’s just nagging pain. Normally I like to play through it with no excuses. I try to grind it out. I wasn’t feeling good so I came out and make sure i’’s OK. It’s all good.”

Michael Beasley scored 10 points and grabbed 6 rebounds off the bench, Enes Kanter contributed with 12 buckets while Jack ended with 8 points and 7 assists.

The Raptors were led by their guards. Kyle Lowry and DeMarr DeRozan scored 22 points each, combining an 18-28 shooting from the field and a total of 17 assists.

Statistically speaking the Raptors shot 56.4% while the Knicks shot barely 33%.

Joakim Noah was sidelined for the third straight game since his status was cleared after receiving a 20 game suspension for drug use. So far, coach Hornacek doesn’t intend to change his rotation, meaning that Noah will not have any role with the team, at least for time being.