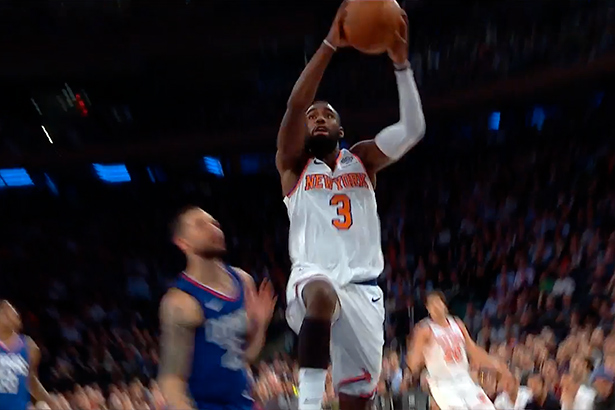 The Knicks haven’t won any game to a margin of 20 points or more last season and now, fifteen games into the new one, they already got their second victory to such a large margin.

With Kristaps Porzingis having another strong performance, with 25 points, the Knicks pushed the Clippers to their 9th straight loss, with an impressive 85-107 victory at the Garden. The success was sweeter as it was New York’s first win against the Clips in five years.

Porzingis also did a great job on Blake Griffin who got outplayed and fouled out with almost 5 minutes left to play.

The Clippers led the hostilities early in the game and managed to take an 8 point lead in the second quarter but after coach Jeff Hornacek called a timeout, the Knicks responded with a 13-4 run that put them up by 12 at halftime.

LA attempted a comeback in the third and cut the lead to two points but their fuel ran out. New York went on a 12-0 run and after just 5 minutes they were leading by 17. From that moment the Clippers couldn’t recover.

Doug McDermott scored 16 points off the bench, going 5-7 from behind the arc, and collected 5 rebounds. Enes Kanter, finished with 12 points and 16 boards. The Oklahoma City connection worked perfect last night making the Carmelo Anthony trade look like a steal for the Knicks.

“I told him he owes me a dinner. That’s his thing (3-pointers), but he’s also playing great defense. I’m glad he’s here with me. But I’m muscling with big dudes to get offensive rebounds to get him open shots. I said, C’mon man, you got to buy me dinner.”

Tim Hardaway Jr, who had to leave the Raptors game due to a foot pain, returned to the starting lineup, dropped 13 points and dished 5 assists. Jarrett Jack scored 11 and sent 7 assists, Courtney Lee added 10 buckets so that all the starters finished in double figures.

Rookie Frank Ntilikina struggled in his worst performance as a Knick, scored none and committed four turnovers. He asked to be benched and, for the first time since October 24th, Ramon Sessions got an opportunity to play. Sessions played the entire fourth quarter and finished with 4 points and 4 assists.

With this win, the Knicks improve to 9-7 and will host the Raptors on Wednesday night.