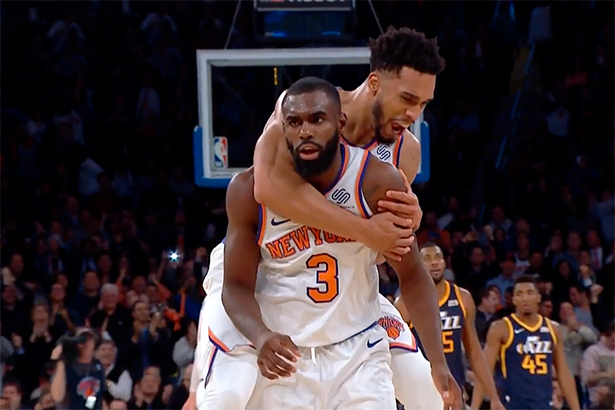 The New York Knicks can now count not only on Kristaps Porzingis but also on Tim Hardaway Jr. to bring them back in the game and getting the win.

Hardaway nailed a three pointer with 32 seconds on the clock to put the Knicks up by four, after they just blew a six points lead in less than a minute. The Jazz couldn’t reply as Rodney Hood missed a 26-foot three point jumper and New York secured the win, 101-106.

“You live and dream for it as a kid coming into a grand stadium like this and making game-winners and playing defense and giving the fans what they want.”

The Knicks had a rough start of the second half and fell behind the Jazz by 12 points in the third quarter, but the comeback machine that worked so well this season did it again.

Hardaway led the Knicks with 26 points and scored 14 of them in the final act. Porzingis backed him up with 22 and Courtney Lee added 19 buckets, 6 boards and 3 dimes.

Frank Ntilikina played the entire fourth quarter in which he scored 5 of his total 7 points.

For the other side, Rodney Hood led the Jazz with 30 points off the bench, Donovan Mitchell finished with 19 while Ricky Rubio and Joe Ingles added 13, each.

Utah failed to win their first road game since the 8th of April and dropped 6-9 while New York improved 8-6 and are 7-3 at home.

recapTim Hardaway JrUtah Jazz
← Previous Story Knicks collapse in the fourth, drop third game at home (104-101)
Next Story → Knicks blown out by Raptors in ugly loss on the road (84-107)